Newly released State Papers show that then Taoiseach Garret FitzGerald urged the temporary lifting of the broadcasting ban on Sinn Féin in 1981.

The documents, released under the 30 year rule, show that Dr FitzGerald argued that the ban was becoming "increasingly indefensible".

Dr FitzGerald called for the lifting of Section 31, which banned members of the IRA and Sinn Féin from appearing on radio or television, just two months after becoming Taoiseach.

There had been controversy earlier that year, when Section 31 was temporarily lifted to allow RTÉ to broadcast Robert Kee's Television History of Ireland, a joint production with the BBC, which included interviews with members of Sinn Féin.

In August, Dr FitzGerald wrote to his Minister for Posts and Telegraphs, Paddy Cooney, arguing that the ban was leading to increasingly absurd situations - RTÉ had not been able to properly cover the Fermanagh-South Tyrone by-election, or to interview the Chairman of Galway County Council, who was a member of Sinn Féin.

The Taoiseach said the ban would become potentially undemocratic as further Sinn Féin candidates contested elections, and asked the Minister to consider lifting the ban for one year as an experiment - this, he said, would put "the people in RTÉ on their best behaviour".

The Coalition Government was keenly interested in improving its media image, especially after introducing a Supplementary Budget three weeks after taking office to deal with a crisis in the public finances.

Finance Minister John Bruton told colleagues that they would have to secure public confidence, by conveying the impression of "a strong and determined Government working to overcome initial difficulties".

The Government also decided to highlight the failings of its predecessor, agreeing to publicise cases where Ministers in the previous Government had announced spending without the approval of Cabinet, or the Minister for Finance. 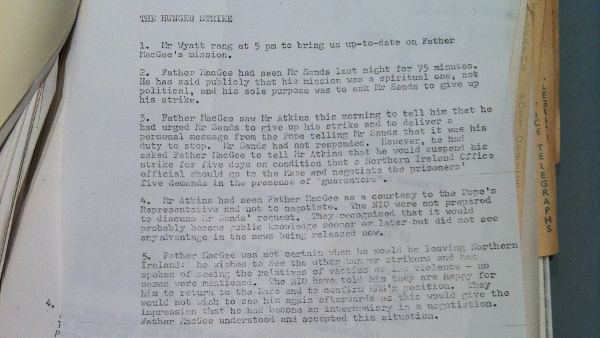