The government has the urgent task of tackling a crisis that has pushed Italy's borrowing costs to untenable levels and brought it to the brink of economic disaster.

Mr Monti, a respected economics professor, said he will himself take the crucial economy portfolio.

Corrado Passera, the CEO of Italy's biggest retail bank, Intesa Sanpaolo, has been given the infrastructure and industry portfolio. Mr Monti immediately rejected claims that this appointment could constitute a conflict of interest.

Some analysts fear the lack of politicians in the administration could make it more vulnerable to ambushes in parliament as it pushes through unpopular measures.

But Mr Monti insisted the lack of politicians would strengthen rather than weaken the government by enabling it to avoid political disputes and push ahead with vital reforms.

"The absence of political personalities in the government will help rather than hinder a solid base of support for the government in parliament and in the political parties because it will remove one ground for disagreement."

He said he will present his austerity programme, to the Senate on Thursday. This is expected to be followed by a confidence vote in both houses of parliament.

Speaking after presenting his cabinet, Mr Monti said he hoped international markets would be placated by the installation of the new government.

He warned that the new government would need to convince the Italian public and parliament about what are expected to be painful austerity policies.

Meanwhile, market traders have said the ECB bought significant amounts of Spanish and Italian debt today, though the bank itself traditionally does not disclose much about its bond purchases.

The move resulted in Italy's cost of borrowing falling below the unsustainable 7% interest rate threshold, although the respite will probably be brief as negative investor sentiment remains the same.

US President Barack Obama has said he is deeply concerned about the eurozone crisis and has warned that market turmoil will continue until Europe has a concrete plan to deal with its debt crisis.

"Until we put in place a concrete plan and structure that sends a clear signal to the markets that Europe is standing behind the euro and will do what it takes, we are going to continue to see the kinds of market turmoil we saw," Mr Obama told a media conference during a visit to Australia.

His comments added to a chorus of non-European policymakers urging greater action to deal with the crisis, and came as equity markets fell in response to a sell-off in eurozone bond markets.

Mr Obama said that while there had been progress in putting together unity governments in Italy and Greece, Europe still faced a "problem of political will" rather than a technical problem.

"We're going to continue to advise European leaders on what options we think would meet the threshold where markets would settle down. It is going to require some tough decisions on their part," he said.

The Chief Executive of Société Générale did not rule out a recession in France next year and said the bank would have to cut "hundreds" of jobs to strengthen its balance sheet, according to a trade union memo.

Bank of Japan Governor Masaaki Shirakawa told a news conference there were signs the European crisis was starting to affect emerging economies through trade and other channels.

"Dollar funding at European banks has also worsened and there are signs of dollar assets being squeezed, or so-called deleveraging," he said. 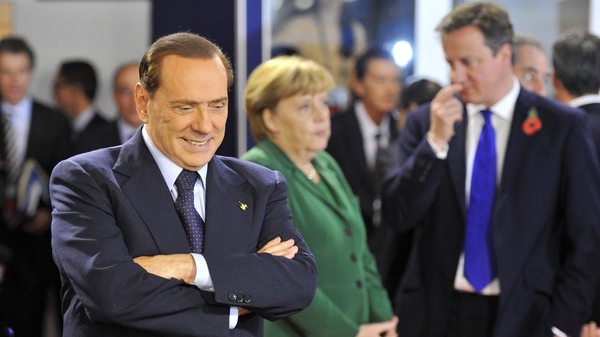