Presidential candidate Martin McGuinness has responded to a statement by the widow and family of Detective Jerry McCabe questioning his suitability for the office of President.

Mr McGuinness rejected the claim by the McCabe family that he met one of the suspects for Detective McCabe's killing while that person was wanted by gardaí.

"The killing of Garda McCabe was unjustifiable. I have condemned it unreservedly.

"A grave wrong was done to the McCabe family and the IRA have acknowledged that and apologised for it.

"I have never and would never stand over attacks on members of the defence forces or the gardaí."

Detective McCabe was shot dead after a bank robbery in Adare, Co Limerick, in June 1996.

The McCabe family called on the other candidates to demand that Mr McGuinness co-operate with gardaí in its ongoing inquiries.

The family issued a statement to the Limerick Leader newspaper in which they posed a number of questions to Mr McGuinness about his relationship with Mr Walsh, who was convicted of the manslaughter of Detective McCabe.

They say Mr McGuinness' actions do not make him a suitable candidate for the office of President of Ireland.

Mr McGuinness later appeared on RTÉ’s Six-One. He was asked who his first guests at Áras an Uachtaráin would be.

He responded by saying he would invite two female TalkTalk workers who he saw on television when they lost their jobs recently.

Michael D Higgins has withdrawn remarks, made in a press release, that David Norris was being "economical with the truth" when it came to whether he had voted against the banking guarantee.

Asked by an Irish Times journalist whether Mr Higgins was withdrawing the statement he replied: "Yes".

Mr Higgins indicated the press release was mistakingly issued by his office without his clearance.

"They didn't clear the statement with me before it went out," said Mr Higgins.

‘’What happened, as I understand it, was that on the order of business David voted on that. And then on the substantive issue it went on through a long debate and that's what, I think the reference, is referring to.

"Then later when the legislation came to implementing the guarantee David spoke and voted on that, but to be quiet honest I am not picking any spat with David on this at all.

"I should say as well, and there's no point in hiding these particular things, it this was one of the rare occasions that something went out from the office without me seeing it," said Mr Higgins.

The debate was told Mr Gallagher could not make the debate as he was recording an interview with TV3.

Dana says she has no 'regrets' running for Presidency

In Wexford, Dana Rosemary Scallon was asked did she have any regrets in running for the Presidency.

She responded by saying that she never regrets standing up for what she knows to be right and that she would always tried to be truthful with people.

She added "the people of this country have had more than enough and they are not being listened to, they are facing hard times ahead and I think they need to know that we will get through this and as a President I will stand shoulder to shoulder with the people."

Presidential candidate Seán Gallagher has responded to reports about his financial and political affairs in the past three years.

One report relates to a large loan paid to him by one of his companies two years ago, while another concerns his fundraising for Fianna Fáil.

The loan of almost €83,000 was paid to Mr Gallagher by one of his companies - Beach House Training and Consulting Limited in 2009.

It breached company law as it exceeded the cap for such loans set at 10% of a company's assets.

Mr Gallagher said this had been an honest mistake and said it related to a cheque that had been lodged to the wrong account.

When this was brought to his attention by his accountants last year, it was moved back to the correct account within four weeks, he said.

In an interview on RTÉ's Morning Ireland, Mr Gallagher was also asked about his role in personally inviting donors to attend a Fianna Fáil corporate fundraiser for former taoiseach Brian Cowen.

Mr Gallagher attended the fundraiser where guests were asked to donate up to €5,000 for the dinner in Dundalk, Co Louth in summer 2008.

He said this was not a secret event and he had asked three or four business people to attend, but he had no idea whether they had made a donation to the party.

Mr Gallagher, who formally resigned from the Fianna Fáil National Executive in January this year, also complained about the negative aspect of the campaign.

Mary Davis was campaigning in Limerick and Tipperary today.

She met students at the University of Limerick and also did an interview with student radio.

This afternoon she met students at St Anne's Secondary School in Tipperary town to present them with their Gaisce awards.

The scheme recognises and encourages young people to get involved in their communities, and to set themselves challenges to work towards and achieve.

Ms Davis told students, teachers, and parents that she has always been involved in active citizenship and encouraged them to go for gold and seek their Gold Gaisce awards.

She said campaigning would intensify in this the last week to polling day, but that she was fit and ready for all of the work the campaign demands.

Ms Davis said she is thoroughly enjoying her campaign, meeting groups and hearing what they would like to see in the President.

She said the poll results are certainly not reflecting the reaction she is receiving on the ground and that her bid to be President is receiving a very positive reaction as she canvasses for votes across the country.

Gay Mitchell attended a number of functions in Limerick, Clare and Cork. 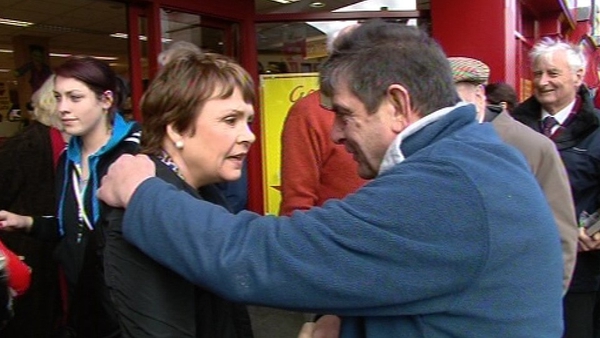 Dana to remain in Presidential campaign