Standard & Poor's has cut Spain's long-term credit rating by one notch to AA- from AA with a negative outlook, following downgrades to the country's top banks.

S&P said high short-term external debt, which was at 50% of GDP in the second quarter of 2011, was leaving "the economy vulnerable to sudden shifts in external financing conditions".

Meanwhile, European Central Bank chief Jean-Claude Trichet said the ECB had done what it could to solve the eurozone debt crisis and it was now up to governments to act.

"I think that the ECB has done all it could to be up to its responsibilities in exceptional circumstances," Mr Trichet told the Financial Times, which stressed he made clear the ECB will not be the lender of last resort for governments.

"The ultimate backstop is, of course, the governments. To do anything that would let governments off their responsibilities would be a recipe for failure," he said in the interview published on the British newspaper's website.

The comments from Mr Trichet, who is retiring at the end of October after eight years at the helm of the ECB, came ahead of the Paris meeting of Group of 20 finance chiefs.

Mr Trichet will join finance ministers and central bankers from the world's major economies today and tomorrow in the French capital.

The September figure was an increase from 2.5% in August, the Eurostat data agency said, confirming a previous estimate of the annual rate of price rises across the 17-nation monetary union.

Analysts had forecast stable inflation at 2.5%.

The ECB's target for price stability is below or close to 2%.

The ECB kept its main interest rate at 1.5% last week despite fears of a new eurozone-wide recession and rising inflation.

Elsewhere, Portugal, which has already received an EU-IMF bailout this year, yesterday presented a 2012 budget with toughened austerity measures.

They include pay cuts for civil servants, longer working hours in the private sector, a VAT hike and slashed budgets for the education and health ministries.

"We have to do more, much more than what was initially planned," Portuguese Prime Minister Pedro Passos Coelho said in a televised address. 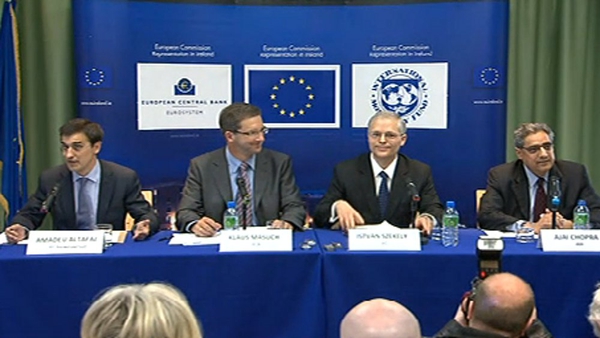