Minister for Environment, Phil Hogan, told a Sunday newspaper that multinational companies would be appalled if Mr McGuinness was President, and indicated his IRA past would drive away corporate investment from Ireland.

Mr McGuinness said the interventions were bizarre and had no validity in the campaign.

He added that it was absolute rubbish to suggest that he had the proceeds of the Northern Bank robbery at his disposal, as Government Chief Whip Paul Kehoe claimed in a Tweet this morning.

Fine Gael candidate Gay Mitchell has said in reference to Martin McGuinness that the people could not put somebody into Áras an Uachtaráin when they do not know who he really is.

Mr Mitchell claimed that Mr McGuiness did not leave the IRA in 1974 and he said he did not live on the average industrial wage as he had claimed.

Meanwhile, Independent Presidential candidate Mary Davis, has said any fees she earned for her service on semi-State and commercial boards were transparent and in the public domain.

She was commenting on newspaper reports today that she had earned up to €350,000 on such boards over ten years.

Independent Presidential candidate Sean Gallagher called on Ms Davis to publish details of what she earned from being a member of various state boards.

He said that anyone who had received fees or taxpayers money for their involvement on state boards should publish that, as it was important for transparency.

Speaking at the fair, Mr Norris said the controversy about the clemency letters he wrote for his former partner is not gaining traction with people, who he said have been very welcoming to him.

Mr Norris also said that even though it would sadden him he would have no problem signing a bill to abolish the Seanad following a referendum if the people voted for that. 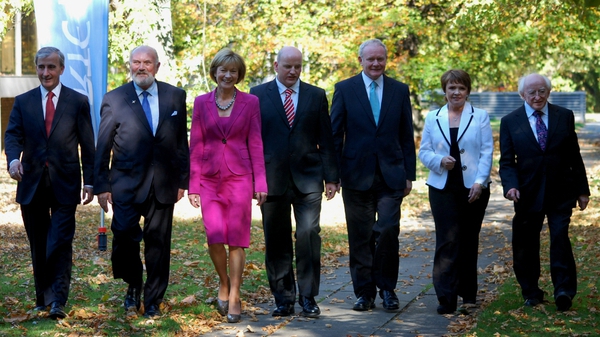