Fianna Fáil has decided not to put forward a candidate in this year's Presidential election.

The decision, taken at parliamentary party meeting today, did not go to a vote and goes along with the recommendation of a sub-committee that met on the issue earlier this week.

However, the party did say it was open to the possibility of backing - or encouraging its members to support - the nomination of another candidate.

It said it will make a decision on this following the close of nominations next month.

Speaking following the three-and-a-half hour parliamentary party meeting at Leinster House this afternoon, party leader Micheál Martin said it was a difficult decision for the party and he realised it would disappoint many members across the country.

However, he said it was a strategic decision because the party needed to renew its capacity and ensure that it could provide robust opposition in the next Dáil session.

The meeting in Leinster House was the first parliamentary party meeting for Fianna Fáil since the summer break and the first since the party's failed overtures to broadcaster Gay Byrne became public.

Mr Martin said there had not been much criticism of his handling of the Presidency issue at the meeting.

He said it is legitimate for the party leader and others to sound out potential candidates.

Mr Martin said he did not agree that MEP Brian Crowley's willingness to run was badly handled, saying he met Mr Crowley last Easter and spoke with him again over the summer and they agreed to wait until the end of August.

He said Mr Crowley is an excellent candidate but the polls were showing that the support for him was mainly Munster-based and not national.

Mr Ó Cuív said there might have been differences of opinion about how they went forward, but a decision was taken and the party will unite behind it. 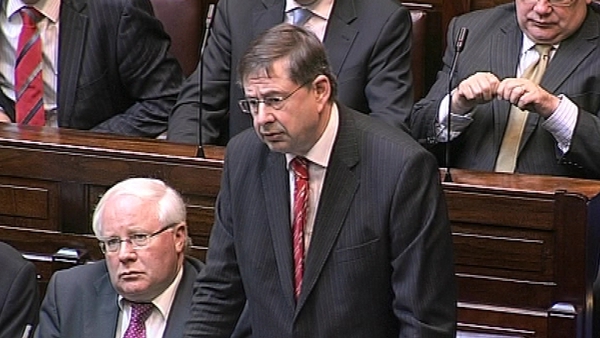