Libyan rebels have met with fierce resistance from supporters of Muammar Gaddafi as they attempt to take control of his hometown of Sirte.

British warplanes have bombed a bunker in the town, which is believed to be one of the last major regime holdouts east of Tripoli.

The African Union, which has refused to recognise the rebels as the rulers of Libya until fighting has ceased, called for the transition process to be 'inclusive'.

The United Nations and Arab League also warned against reprisals from those on the rebel side.

Clearly fearing a break-down of order in the weeks ahead rebels have already announced the establishment of a centralised command in Tripoli to try to stop the disparate fighters that fill their ranks from becoming fragmented.

Yesterday the National Transitional Council (NTC) also moved many of its top people from their Benghazi base to Tripoli.

Ali Tarhuni, a NTC official, said their leader, Mustafa Abdel Jalil, is due to arrive as soon as the security situation permitted.

'Long live democratic and constitutional Libya and glory to our martyrs,' he said.

He called on forces loyal to Gaddafi to lay down their arms, and promised they would be treated lawfully.

The exact whereabouts of Gaddafi are still unknown at this time, though rebels are confident that he will be found in Sirte.

'Put your weapons down and go home. We will not take revenge. Between us and between you is the law. I promise you will be safe.'

More than 200 decomposing bodies were found at a hospital in Tripoli after staff fled from nearby clashes between Gaddafi loyalists and rebel fighters.

Many of those who died had gone there having been injured in the fighting but were left untreated.

There have been accusations that Gaddafi’s supporters may have attacked staff and patients at the hospital however it is as yet unclear how those there died.

US Secretary of State Hillary Clinton has pledged support for the 'new Libya', urging the rebels to build a secure, democratic state.

She said: 'The situation remains fluid, but it is clear that the Gaddafi era is coming to an end, opening the way for a new era in Libya - one of liberty, justice, and peace.

'There can be no place in the new Libya for revenge attacks and reprisals. Libya's future will be peaceful only if the leaders and people of Libya reach out to each other in a spirit of peace.'

The NTC also received a boost as a deal was struck at the United Nations to release $1.5bn of frozen Libyan assets.

The UK Government's focus has also started to shift towards Libya's future under the NTC, although Foreign Secretary William Hague said what happened to Gaddafi was a 'very important component'.

He told BBC's Newsnight: 'It's one of the important things to bring him to justice, one of several important things, of course for there also to be more order and security established in Tripoli, for the NTC to have access to more funds - all of these things - and what happens to Gaddafi is one very important component.' 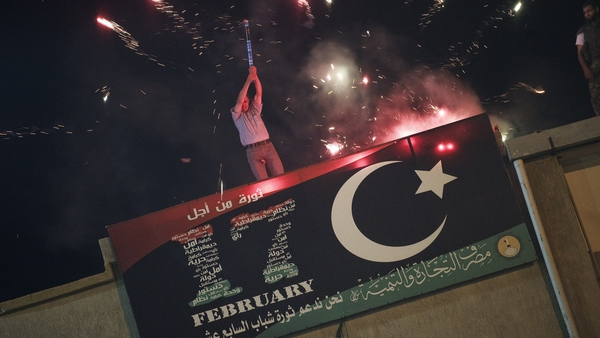 As It Happened Monday - Battle for Tripoli