At least nine people died after a riverboat collided with a barge and sank in the Moscow River, a spokeswoman for Russia's Emergencies Ministry said.

The private boat carrying 16 people sank after colliding with the river barge at around 1am (10pm Irish time).

Russian media quoted passengers as saying the boat had been rented for a birthday celebration.

A string of transport disasters ahead of parliamentary elections in December and presidential polls in March has led President Dmitry Medvedev and Prime Minister Vladimir Putin to condemn the state of the country's infrastructure and endemic regulatory corner cutting.

The captain of the barge helped save some of the seven passengers who survived, including one man who swam to shore.

Survivors wrapped in brown blankets huddled on the river's grassy bank watching Emergencies Ministry boats and divers searching the sunken craft before work began to raise it to the surface of the river.

Among those saved was a Turkish citizen and a US embassy employee, Interfax reported Investigative Committee spokesman Vladimir Markin as saying.

State-run RIA news agency said the owner of the Riverboat Swallow had in the past been punished for exceeding the ship's passenger limit of 12. He was among the dead.

Russia 24 quoted witnesses as saying the riverboat was moving erratically on a 200 metre-wide bend in the river before it collided with the barge in southwest Moscow, near Luzhniki Stadium, the site of the 1980 Summer Olympics.

Three weeks ago, 122 people died on the Volga River when the riverboat Bulgaria listed to one side and sank within minutes.

Mr Putin blamed irresponsibility and the desire for a quick profit for that disaster, Russia's worst river accident since 1983. 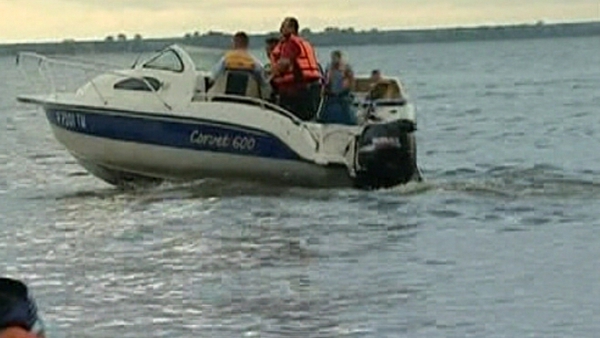