One of the three former gardaí being probed by the Smithwick Tribunal has insisted that he did not make up claims about the driver of a car acting suspiciously outside Dundalk Garda Station while two RUC officers were inside.

Former Detective Sergeant Leo Colton, along with former detective sergeant Owen Corrigan and former sergeant Finbarr Hickey are being examined by the tribunal to see if there is any evidence one or more of them colluded with the IRA in the murder of the two senior RUC men.

All three vigorously deny the claims of collusion.

Supt Bob Buchanan and Chief Supt Harry Breen were murdered minutes after leaving a meeting in Dundalk Garda Station by the IRA in March 1989.

This afternoon, Mr Colton became the first of the three to give evidence. However, he was not asked about the allegations but will return at a later date for that.

Today, senior counsel for the tribunal, Justin Dillion, questioned Mr Colton about statements he had made after the killings.

In particular he focused on whether Mr Colton or another sergeant had briefed the gardaí coming on duty as both officers said they had done it. Under cross-examination, Mr Colton said he was there and did some of it but most of the briefing was done by the other officer.

He was also questioned at length about his report that he had seen a northern registered car drive through the car park at the garda station while the RUC officers were inside.

In his statement at the time, the former Det Sgt said he saw the driver look from side-to-side as if he was trying to find a car. The vehicle in which the two RUC men had driven down was also parked in the car park.

Under repeated questioning by Mr Dillon, the witness insisted the car did exist and he had seen it, although he acknowledged he did not remember the full registration number of the car the day after he had seen it. The car was never found.

Earlier, another retired detective garda, Laurence Crowe, who was also based in Dundalk, said he had no doubt the fate of the two RUC men was sealed a long time before the meeting.

He believed the IRA were following the car driven by Supt Buchanan for sometime.

Whichever of the two roads they could have taken back to Northern Ireland, they would have been stopped and killed as the same IRA unit could have covered both, he said.

The former detective also said there were between 50 and 60 'hardcore' IRA members along the border and probably the same number again in Dundalk.

In addition there were a lot of other sympathisers who provided safe houses and information.

An RUC officer asked a garda to offer an IRA suspect who was being questioned in a border station Stg £5,000 per week to co-operate with them, the Smithwick Tribunal earlier heard.

Former sergeant Brian Moroney told the tribunal the incident happened in the early 1980s after a subversive suspect had been arrested and was being questioned in Monaghan Garda Station.

The witness said he did not know how the RUC officer found out but he arrived into the station.

He asked the witness to offer the suspect the money to co-operate but he refused, saying it was not the job of the gardaí and they would not deal with that kind of stuff.

He then asked the RUC officer to leave and he did.

The tribunal was also told by a former garda chief that he had heard suggestions that then Detective Sergeant Owen Corrigan was involved in smuggling when based in Dundalk.

Former Chief Superintendent Michael Diffley said they were only suggestions and he added that there was a difference between personal and commercial smuggling.

He said he did not know the level at which Mr Corrigan was involved, he just knew it had been mentioned.

The tribunal is investigating claims that a garda colluded with the IRA in the murder of two senior RUC men, Chief Superintendent Harry Breen and Superintendent Bob Buchanan.

They died in an IRA ambush on 20 March 1989, minutes after leaving Dundalk Garda Station. 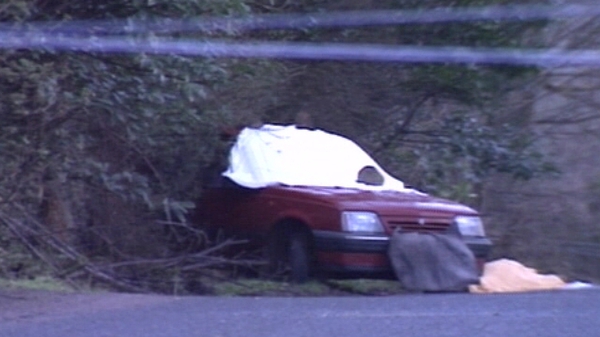 RUC concerns were passed to garda