Taoiseach Enda Kenny has announced that there will be no income tax increase in the Budget.

He was speaking at a joint news conference with Tánaiste Eamon Gilmore to mark the Government's first 100 days in office.

Mr Kenny said Ireland was making 'huge sacrifices' to help to solve the eurozone crisis and stressed that Ireland would pay back all its loans after it had overcome its financial crisis.

He called on the leaders of the European Union to put aside their domestic political agendas and support member states that are clearly achieving targets and working towards recovery.

Eamon Gilmore said no previous government has ever inherited such a crisis in unemployment, in public finances and in banking.

'We have taken the decisions to restructure the banking sector but ... there is no silver bullet to solve the problems.'

'The immediate focus will be on restoring economic independence and a diplomatic offensive to restore the country's reputation abroad is under way.'

The two did admit that the Government had not done everything it said it would do.

Speaking later on RTÉ's Six-One News, Mr Kenny said that the Government had decided to make a commitment not to increase tax or cut social welfare to allow people to plan their lives.

He said these measures were fundamental to the Programme for Government and that is why they had been announced so early in the year.

In his acceptance speech after his election as Taoiseach, Mr Kenny pledged to introduce a range of reforms in his first 100 days.

Some of those targets have been met, such as the 'jobs budget' - even if Mr Kenny later thought better of the term.

But others, such as the setting up a Strategic Investment Bank, have proved too ambitious.

The firm pledge to renegotiate the European Union-International Monetary Fund deal, which Mr Kenny said was bad for Ireland and bad for Europe, has proved beyond the Government too.

Beyond those promises, U-turns have been signalled on third level fees, hints of social welfare cuts and income tax increases and the new gender quota rules will be put on hold. 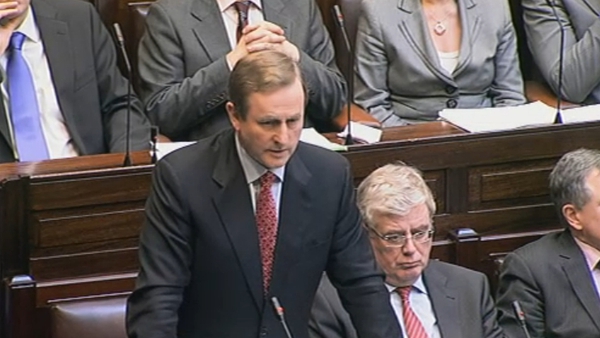