Alternative plans are in place to transport US President Barack Obama to Moneygall tomorrow, if the weather does not allow for helicopter travel.

Barack Obama will arrive in Dublin tomorrow morning for a 24-hour visit.

Traffic restrictions remain in place in the capital.

The US President is due to spend 45 minutes in his ancestral home town of Moneygall, Co Offaly. Weather permitted, he will travel there by helicopter and is scheduled to arrive at 3pm.

Met Éireann forecasts that tomorrow will be extremely windy or stormy, with gust of up to 100km/h.

However, a Department of Foreign Affairs spokesperson has said alternative plans are in place to take the President to the town, if he cannot get there by helicopter.

Offaly County Council has said the M7 exit for Moneygall is now closed.

The M7 exits between Roscrea and Nenagh junctions will be closed between 1pm and 4.30pm tomorrow afternoon.

Giant US aircraft arrived into Dublin yesterday carrying the helicopters, jeeps and limousines that will transport the US presidential entourage.

Meanwhile, traffic restrictions are in place in Dublin city centre ahead of the president's arrival.

There is no parking in an area from Dublin Castle to Government Buildings, as well as on the north and south quays, until Tuesday.

The Phoenix Park is closed until Tuesday, but Dublin Zoo is open today.

Gardaí say a number of roads around the US Embassy in Ballsbridge will also be closed between 6am and 2pm tomorrow morning.

Dublin Bus said there will be restrictions to some routes in the city centre.

Dart, Commuter and Intercity services will be suspended at times between Connolly and Pearse stations.

On arrival, Mr Obama and his wife, Michelle, will first travel to Áras an Uachtaráin to meet President Mary McAleese. He will then meet Taoiseach Enda Kenny at Farmleigh. 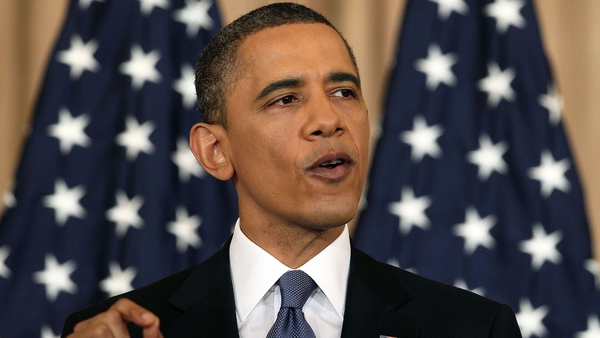