Britain's Queen Elizabeth II has left Ireland aboard a jet from Cork Airport, bringing an end to her four-day State visit.

The Queen walked to the plane passing an army guard of honour and Taoiseach Enda Kenny was there to bid her farewell.

Large crowds had lined streets in Cork city centre and the Queen was given a tour of the city's English Market by the Lord Mayor.

She met some stall owners and spoke to members of the public after she left the market.

There was a carnival atmosphere on the streets of Cork and the visit was more relaxed than many engagements in Dublin.

Queen Elizabeth and Prince Philip also called to the Tyndall Institute, which is run by University College Cork.

While at the institute, they met twins Hassan and Hussein Benhaffaf and their mother Angie.

Earlier, the Queen and the Duke visited the Rock of Cashel in Co Tipperary and paid a private visit to Coolmore Stud.

The Queen has indicated she would like to return to Ireland for another visit.

Mr Kenny said he invited her to return as she boarded her flight at Cork Airport.

The Taoiseach said the Queen told him she and the royal party enjoyed the visit. Mr Kenny paid tribute to everyone involved in the State visit.

He said Ireland responded magnificently to the visit, from the President right down to ordinary people, who showed restraint and understanding.

Mr Kenny said the Queen had received a real Irish welcome, which he said demonstrated the importance of a new beginning for both islands.

He said that Ireland had measured up to the highest global standards and the county could be proud.

Tánaiste and Minister for Foreign Affairs Eamon Gilmore said the visit had enhanced Ireland's reputation abroad at a time when there were only negative headlines.

Mr Gilmore said that, because of the visit, the world was finally getting a picture of a country that did things well and that was working through its difficulties.

Sinn Féin President Gerry Adams has said that, while expressing concerns about Queen Elizabeth's visit, he also hoped some good would come from it. 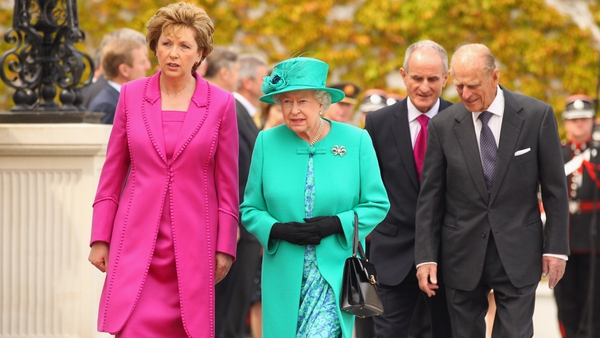