NATO has dismissed an offer from Muammar Gaddafi for a ceasefire and negotiations, saying actions, not words were needed first by the Libyan leader.

A NATO official said Western air strikes in Libya would continue until government forces ended all attacks against civilians and returned to base.

He said there would have to be unhindered humanitarian access to all people in need of assistance and added that Colonel Gadaffi had previously announced ceasefires but continued to attack cities and civilians.

Earlier, Col Gaddafi said he is ready for a ceasefire and negotiations provided NATO 'stop its planes'.

However, he has refused to give up power as rebels and Western powers demand.

Weeks of Western air strikes have failed to dislodge the Libyan leader, but have instead imposed a stalemate on a war Gaddafi looked to have been winning.

Government forces have been held at bay in the east and around the besieged city of Misrata.

With neither side apparently able to gain the upper hand, Gaddafi struck a conciliatory tone in an 80-minute televised address to the nation in the early hours of this morning.

'(Libya) is ready until now to enter a ceasefire,' said Gaddafi, speaking from behind a desk and aided by reams of paper covered in what appeared to be hand-written notes.

Gaddafi denied mass attacks on civilians and challenged NATO to find him 1,000 people who had been killed in the conflict.

'We did not attack them or cross the sea ... why are they attacking us?' asked Gaddafi, referring to European countries involved in the air strikes.

But as he spoke, NATO warplanes hit three targets close to the television building in Tripoli in what state media said was an attempt to kill Gaddafi who has ruled Libya for 41 years.

The air strikes left a large crater outside the attorney general's office, but did not damage the building, and hit two other government offices.

Previous ceasefire offers have also been rebuffed by NATO as Libyan government forces continued to fight on, something that looked as though it would be repeated as Gaddafi indicated he wanted both sides to stop fighting at once, saying 'a ceasefire cannot be from one side'.

The Libyan leader refused to leave the country or step down, the central demand of the rebels, the US, and also of France and Britain who are leading the NATO air campaign.

'I'm not leaving my country,' Gaddafi said. 'No one can force me to leave my country and no one can tell me not to fight for my country.'

Gaddafi's forces showed no sign of giving up the fight either, claiming to have captured the port of the city of Misrata, the last major rebel outpost in western Libya, but NATO said it saw no evidence of that.

Libya's government has threatened to attack any ships approaching Misrata.

NATO said Gaddafi forces had laid mines on the approach to the harbour, under siege for weeks, and forced a temporary halt in humanitarian shipments.

'NATO forces are now actively engaged in countering the mine threat to ensure the flow of aid continues,' the alliance said. 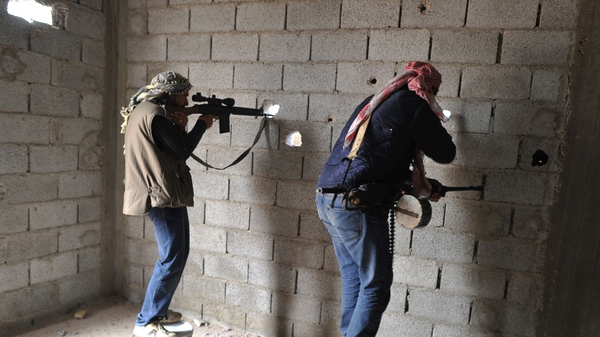