Egyptian authorities have brought a fire under control after a pipeline running through the North Sinai region of Egypt was bombed.

The pipe supplies gas to Israel and Jordan

It is the second such attack since February and comes two weeks after Egypt's new government decided to review all contracts to supply gas abroad.

The attack took place at dawn near Al-Sabil village in the El-Arish region.

On 27 March, exactly a month earlier, six armed men stormed the gas terminal in the northern Sinai town and placed explosive devices which failed to explode.

MENA said armed forces rushed to the scene and quoted locals as saying they heard a huge explosion followed by a massive fireball.

There were no reports of casualties.

Several hours later, Gasco, the company responsible for the pipeline, said the fire had been brought under control.

'There is still a certain amount of gas in the pipeline which we can use.'

Jordan's Energy Minister Khaled Tuqan confirmed Egyptian gas supplies had been halted after the attack. 'Power stations are now depending on heavy fuel and diesel to generate electricity,' he said.

But he warned Jordan now has only 'enough supplies of heavy fuel and diesel for two weeks.'

A previous disruption in February cost the Jordan economy some $4.2 million a day.

Jordan imports about 6.8 million cubic metres of Egyptian gas a day, or 80% of its electricity needs. 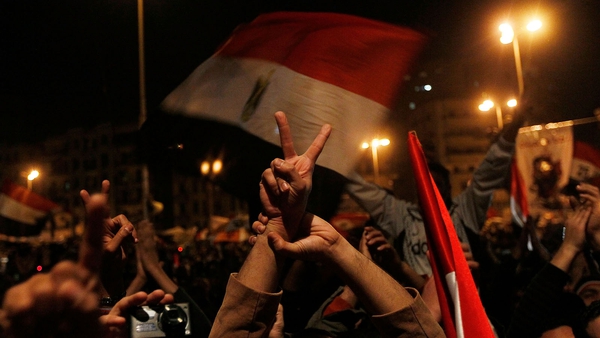 Hosni Mubarak steps down in Egypt