Anglo Irish Bank, which has been nationalised by the State, has removed its name from all its offices throughout Ireland today.

A new name will be announced once the acquisition of INBS is completed shortly.

The bank said the move was 'another step in fundamentally changing the bank as it seeks to wind down its loan portfolios over time'.

Economist Colm McCarthy passed by shortly after publishing his advice on the sale of State assets to boost Government funds.

'Sure they could sell the signs - they'd be worth a fortune,' he is reported to have said.

The dismantling in Dublin, Belfast, Cork, Galway, Limerick and Waterford means Anglo no longer has any visible presence on Ireland's streets.

A spokeswoman for the bank said several requests have been made to put the signage up for auction for charity.

'The signs are going to be stored in a vault in the bank. There are no firm plans on what to do with them,' she said.

Mike Aynsley, Anglo's group chief executive, was handed the Anglo logo as he stood at the front door of the former HQ and watched the dismantling.

'This organisation is radically different today from the Bank I joined in September 2009. We have undertaken a root and branch overhaul which positions the Bank to wind down our portfolio of loans with the highest levels of efficiency,' said Mr Aynsley.

'The Board and management team have overseen the Bank's transformation from a high octane property lender to a dedicated asset recovery Bank working in the public interest.

'The organisation now has a fundamentally different mandate, structure and culture as it focuses exclusively on getting the maximum return for the Irish taxpayer.

'Removing the old Anglo signage is a step towards reflecting this new reality which will be further developed following the acquisition of INBS.'

So far the bank has cost the taxpayer €29.3bn in recapitalisation costs.

The size of its future loan losses yet to filter through and which may lead to further injections of money is still the subject of conjecture. It still has around €35bn of loans on its books. 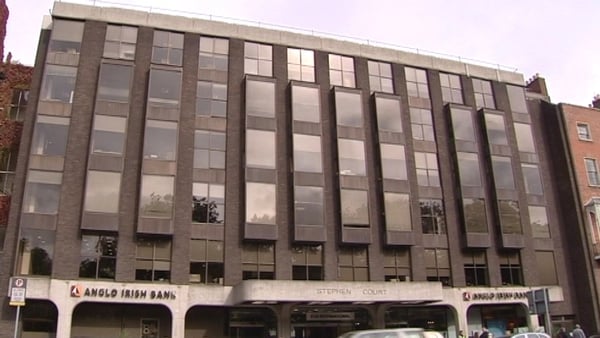