The Government has agreed the terms of a comprehensive review of expenditure that is expected to be completed by September, ahead of the end of year Budget.

Public Expenditure minister Brendan Howlin said last night that he wanted the process to start early in the life of the Government to avoid ministers being 'captured' by their department.

Each line minister is being asked to conduct a root and branch review of expenditure and structures within their departments and agencies.

Mr Howlin said the Cabinet had agreed two memos, one on the current side, and one on a review of capital expenditure, which would cover State assets.

However he told journalists that the McCarthy Report was not discussed and would be brought to Cabinet separately.

He also said that the May jobs' Budget would be considered at a later meeting.

Mr Howlin said it was not a mini budget but accepted that the cost of any job creation measures would have to be offset by savings or charges elsewhere.

Earlier, Taoiseach Enda Kenny said the Cabinet meeting would consider an overview of spending in all Government departments in a serious and forthright manner.

He said the Government was not in a position to go to international markets to borrow money and that, in accordance with the IMF/EU deal, there has to be a real scrutiny of money being spent.

Mr Kenny reiterated his stance on corporation tax saying there would be no moving on Ireland's 12.5% tax rate. 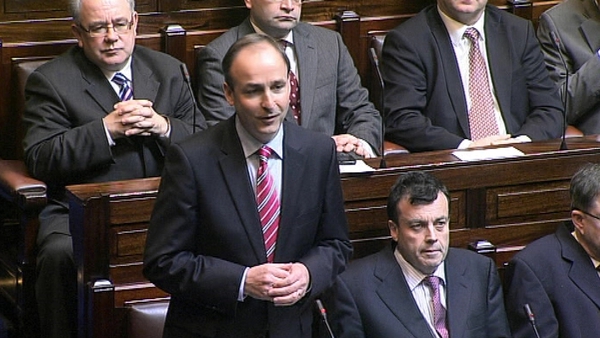