Several people have been wounded after an anti-tank missile fired from Gaza hit a school bus in Israel.

At least eight people, including a four-year-old girl, were wounded in the densely populated Gaza area by the Israeli response, which included tank, warplane and helicopter fire.

Israeli police spokesman Mickey Rosenfeld said some of those wounded in the bus attack this afternoon were being treated at the scene.

The head of the Magen David Adom ambulance service told Israel Radio that helicopters were ferrying the worst injured to hospital.

Following that attack in Israel, an Israeli F-16 warplane bombed a major security compound of the Islamist Hamas group which rules Gaza, rocking Gaza City with a big explosion.

An Israeli helicopter gunship machine-gunned a target in Gaza for the first time since the January 2009 war and fired a missile at some targets in the centre of the coastal territory.

Palestinian sources said militants in the enclave fired back at the helicopter with a heavy machine-gun.

Israeli Defence Minister Ehud Barak issued a statement saying he had ordered the military to 'swiftly take all the necessary steps and respond to the attack'.

Israel holds Hamas responsible for all events taking place in the enclave, he added.

The missile attack followed a relative lull in cross-border attacks between Gaza and Israel, after a sudden rise in violence last month.

Israel and Hamas had signalled readiness to return to a de facto ceasefire which has kept the border relatively quiet since the end of the December 2008-January 2009 Gaza war. 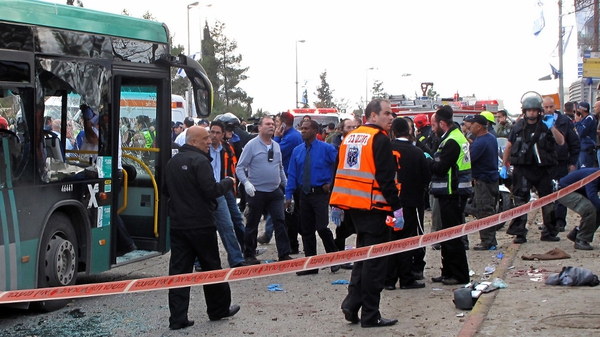