Taoiseach Enda Kenny has told the Dáil that the Moriarty Report is to be referred to the Director of Public Prosecutions and the gardaí.

He said there would be a Dáil debate on the report next week.

The report, which was published yesterday, criticised the role of former minister - now an Independent TD - Michael Lowry in the awarding of the second mobile phone licence in the 1990s.

In the Dáil, Mr Kenny said the donation of $50,000 to Fine Gael by Denis O'Brien was wrong and that he regretted the circuitous route by which it was sent back to the donor.

He told Fianna Fáil leader Micheál Martin that he had read the key points and that it was a serious report.

Minister for Enterprise Richard Bruton this morning said that the 'Government has to take time to study the implications' of the report.

Sinn Féin leader Gerry Adams said the Moriarty Report is being discussed everywhere around the country except in the Dáil.

Mr Adams said it was the most important issue facing the country at this time and the gap between the governed and the Government was widening by the refusal to have it debated.

He said the section about the $50,000 donation to Fine Gael and the convoluted process it involved read like a novel.

The Taoiseach said all members of the House would get the opportunity to contribute on the report next week and that the debate was being organised by the party whips.

He said Mr Adams might shed some light on his knowledge of the Northern Bank robbery during the debate, a reference which the Sinn Féin leader branded a 'cheap jibe'.

Mr Adams asked the Taoiseach to clarify if Fine Gael had received any monies from sources that have not been declared.

Tánaiste and Minister for Foreign Affairs Eamon Gilmore has said Mr Lowry should resign in the light of criticisms in the report.

Mr Gilmore said there is one law in this country and it should apply to everyone.

He also said he welcomed the acknowledgement from Fine Gael that the issue of the $50,000 donation to the party could have been handled differently but that legislative changes made since then would render such a donation now illegal.

The report also said that Mr O'Brien made payments and a loan guarantee to Mr Lowry worth more than £900,000 sterling between 1996 and 1999.

Both men have rejected the judge's findings, claiming that they were based on opinion and not fact.

Earlier, Mr Martin said Mr Lowry should consider his position in view of what he called the damning nature of the Moriarty Tribunal report.

Mr Martin said he accepted the report's findings into what he has called the biggest corporate scandal in the history of the State.

'The Dáil should be re-convened on Monday to allow a debate.'

Speaking on Morning Ireland, Mr Martin also said he could not accept that Mr Lowry had acted independently of the Cabinet.

Meanwhile, businessman Declan Ganley has welcomed the findings of the report.

Mr Ganley was a member of the losing Cellstar consortium in the competition for the second mobile phone licence and is suing the State and other parties in relation to the competition.

Also speaking on Morning Ireland, Mr Ganley said he hoped the matters raised in the report would be brought further. 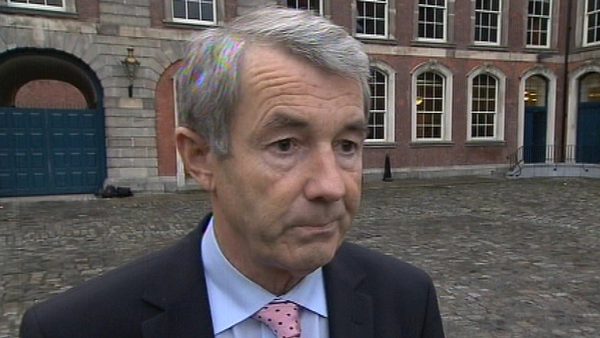