The Department of Foreign Affairs is advising people to avoid all travel to Bahrain.

The advisory has been upgraded after the department had earlier warned against all non-essential travel to the kingdom.

The department also said that any Irish citizen living or travelling there should register their details at the embassy in the Saudi Arabian capital of Riyadh.

A consul from Saudi Arabia visited the Gulf kingdom two weeks ago to provide assistance to Irish citizens, about 250 of whom live in Bahrain.

The King yesterday invited 1,000 Saudi-led troops from the Gulf Co-operation Council into his country.

Bahrain has been shaken by a month of protests by members of the Shia majority against the rule of the Sunni royal family.

A hospital medic in the village of Sitra, south of the capital, has said that 200 people were shot and wounded today.

More than 200 others are said to have been admitted to hospital suffering from tear gas inhalation.

US Secretary of State Hillary Clinton said Bahrainis must 'take steps now' toward a political resolution of the crisis. 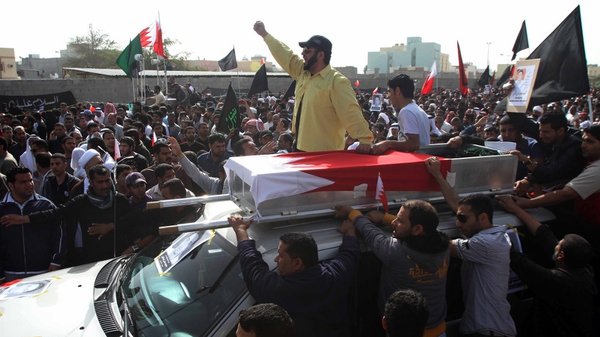 Over 60 wounded in fresh Bahrain clashes