Hazel Stewart broke down in the dock as she listened to a tearful police recording of her admitting and saying sorry for plotting the murders of her policeman husband and lover's wife.

Ms Stewart held her head in her hands and cried as the emotional confession to detectives was played to a packed Coleraine Crown Court on the 11th day of her double murder trial.

After a series of denials over the course of two days of intensive interrogation after her arrest in early 2009, the mother-of-two finally acknowledged her involvement in the murderous plan conceived by her then lover Colin Howell to poison her husband PC Trevor Buchanan and his wife Lesley, and make it look like suicide.

Ms Stewart's children Lisa, who also wept, and Andrew and second husband David sat in the public gallery, feet away from her in the dock, as the dramatic conclusion of her final interview was played to the jury.

Detective Sergeant Geoff Ferris, who described the crimes in May 1991 as ‘nearly the perfect murder’ during the interview in Coleraine police station, put it to her: ‘Colin Howell could not have done this on his own and you could not have done it on your own Hazel, this had to be a joint enterprise between the two of you, the two of you had to work together to make this plan come to fruition, do you accept that?

The officer added: ‘Sorry, just for the benefit of the tape.’

The 47-year-old secretary, from Ballystrone Road, Coleraine now denies being part of a joint enterprise to murder her husband and Mrs Howell.

But on the last of 15 taped interviews two years ago, she cried as she apologised for her actions.

Ms Stewart's statement to police was made only days after Howell, a once respected dentist, confessed the crimes to elders in his church.

He said since pleaded guilty to poisoning their spouses with carbon monoxide pumped from his car while they slept in their respective homes in Coleraine, then staging a scene in nearby Castlerock to make it look like a bizarre suicide pact.

When asked by DS Ferris if she wanted to add anything at the conclusion of questioning, Ms Stewart said: ‘I would like to say sorry to Trevor's family, I can't imagine what it would be like to lose a son, I've a son (Andrew) and I love him very much.

‘To David, my husband, I love so much, Lisa and Andrew they're my life and I have lost it, I've lost it.

‘The biggest mistake of my life was ever meeting Colin Howell and I have paid the price for the past 17, 18 years.

‘Since that happened I lost so much of my life, I lost like a joy, a peace, contentment. It was like having a black hole every day I got up. Every night I went to bed it was there. I thought about it 24-7. It never ever left me.’
She told the detective she had been plagued with guilt.

‘Life has been horrific for me. I never got over it,’ she said.

‘The thought of losing my children, losing David, is the hardest thing but I took it, was part of them. Yeah I destroyed their lives, Lisa and Andrew's lives, Colin's children. They didn't deserve this or Lesley, Lesley was a lovely girl.

‘Trevor was very good too, there was nothing wrong.

‘I was soft, easy target I know I was. But I'll live with this to the day I die and even it's out in the open I have destroyed and hurt more lives and people will be so shocked, my own family, my mother especially Lisa, Andrew and David, they're my life.’

Ms Stewart admitted to police she was aware of the plan in advance and knew that her husband was to be killed that night after Howell had murdered his wife.

She admitted that part of the plan was drugging her husband but insisted she did not give him a tablet - something Howell claims.

Stewart said he took a tablet himself that night but that she encouraged him to.

‘He said himself he couldn't sleep so I said why don't you take something, so he took one,’ she told police.

But Ms Stewart conceded that she would have had to give him something if he had not taken a Temazepam sedative himself.
The professed devout Christian admitted she cut up and burned a garden hosepipe which Howell used to gas their partners while they slept.

As well as destroying the hose on an open fire, she washed and replaced bed covers in the room where he was poisoned, opened the window to get rid of carbon monoxide fumes and got clothes which Howell used to dress her husband before driving him off in a car with his dead wife.

The bodies of Pc Buchanan, 32, and Mrs Howell, 31, were found in a car filled with carbon monoxide fumes in the seaside town of Castlerock.

Police first believed the pair died in a suicide pact because they were so depressed about the affair their partners were having at the time.

Howell is serving a 21-year jail sentence after he admitted his guilt in Belfast Crown Court last year.

Stewart claimed she wanted no part of the plan but that Howell kept ‘tapping’ away at her until she eventually relented.

In the 25-minute interview that commenced shortly after 8pm on Saturday, 31 January, 2009 - two days after her arrest - she said she had destroyed the life of her second husband David.

‘I've wrecked his life, my children, I don't know I can only hope and pray that the church, the church will stay close to my children and to David and that they will look after them cause I can't be there for them and they need me, they need me.

‘I can't, I can't have them now because of this, because of it,’ she said.

DS Ferris acknowledged her statement but questioned why her emotions had not stopped the murders back in 1991. He said her love for Howell was so strong that she had allowed it to take place.

‘I don't know if it was love at times or fear with him,’ she replied.

He said she had ample opportunities to stop the plan.

The detective added: ‘You were part of a plan Hazel, which was to murder two people. The plan was carried out and it was near the perfect murder. You got close, very close but it doesn't always work out like that and it has came to a head this week.’

Earlier in the interview the officer described the killings at ‘calculated’:

‘Can it get any more cold, colder than that Hazel?’ 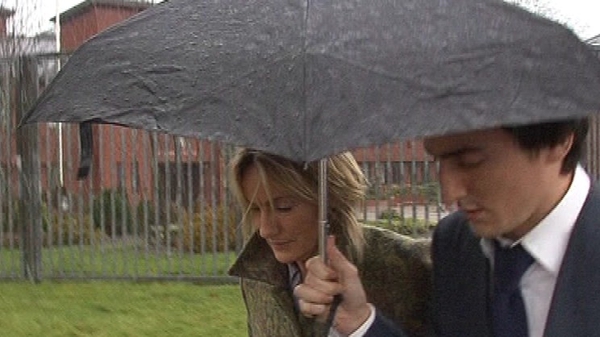