Fine Gael leader Enda Kenny has said he will not draw any money from his teacher's pension, and has challenged Fianna Fáil leader Micheál Martin to resign from his own teaching position in the morning.

Addressing a rally of Fine Gael supporters at the Aviva stadium in Dublin, Mr Kenny declared he will 'not accept' any money from his teacher's pension despite 'simply paying into it for many years.'

He has now challenged Mr Martin 'to resign his position as a teacher tomorrow morning.'

Enda Kenny was responding to comments on RTÉ's This Week by Mr Martin that he should explain what he intended to do about a €100,000 payment he was entitled to from his pension fund.

During his speech today, Mr Kenny turned directly to the topic saying: 'I have not drawn one cent from my teaching position in over two decades.' He said he had resigned from his post many years ago and it had been filled by a 'full-time' teacher.

Mr Kenny, a former school teacher, spent a small number of years in the classroom before becoming a full-time politician.

Earlier, Mr Martin had accused Fine Gael of hypocrisy on the issues of severance payments and pensions.

Mr Martin said it was wrong that the country found out only today that Mr Kenny was entitled to a teacher's pension: a lump sum of €100,000 in April and €30,000 per annum although he worked as a teacher for only four years.

Mr Martin said he had forfeited his own teaching pension rights.

Mr Martin said: ‘We also learned this morning, that he was due to get a massive lump sum of €100,000 next April, the real issue is hypocrisy, and I accuse the Fine Gael party of rank hypocrisy in campaigning around the country on this and doing something else. They have talked the talk, but they do not walk the walk and also it was hidden from the people.’

Parties in final push for votes

On the last Sunday before the General Election, political parties are preparing for a final push to secure support before Friday's ballot.

Two opinion polls - in the Sunday Business Post and Sunday Independent - show Fine Gael on course to lead the next government, either alone or in coalition, while Enda Kenny is, for the first time, the leading choice to become Taoiseach.

A crowd of around 1,000 people gathered at the Aviva stadium to greet Mr Kenny and all of Fine Gael's Dublin candidates, at the last major public rally ahead of the General Election.

In his speech Mr Kenny said that with five days to go in the campaign that the power remained with the people of Ireland, who he hoped would cast their vote for Fine Gael's plan for Ireland.

He added: 'If you vote for our plan, you say publicly, for the world to hear, 'No more now, we've been humiliated enough, betrayed enough.'

Labour leader Eamon Gilmore has the country needs a fair, balanced and stable Government and he said that the only way that this will happen is if Labour is part of the next Government.

He said the election is about what the next Government is going to do for families.

He was speaking in Cork where the party launched its plan for distressed mortgages and personal debt.

Mr Gilmore said he did not think a Fine Gael Government supported by Independents would last 12 months.

Responding to the latest opinion polls, he said around 25% of voters are undecided or say they will change their minds and that will decide the outcome of the election.

The Labour leader also said the party's plan for a two-year moratorium on home repossessions would kick in immediately if in Government.

Fianna Fáil's Irish language policy was being published this afternoon, while this evening party leader Micheál Martin was to deliver a ‘rally the troops’ speech in Navan.

Earlier, Mr Martin had said the €6bn financial correction that had to be made, and which hurt people, was clearly affecting the popularity of Fianna Fáil.

He said that there was no doubt that it was a very challenging election for Fianna Fáil, but he was heartened by the vitality of the party membership around the country.

Mr Martin said the most fundamental errors made by the outgoing coalition Government was not standing out from the political consensus on an ‘economic soft landing’ and allowing an absence of oversight of the banking regulation.

Fianna Fáil has published its Irish language policy. The party says its plan will be based on building on the 20 Year Strategy For The Irish Language published last year.

The party wants to implement a comprehensive strategy based on scientific evidence and international best practice in language planning, sociolinguistic intervention and education. 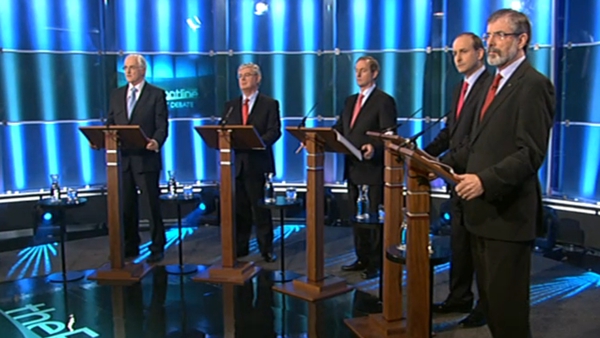