The funerals of two of the Northern Ireland victims of the Cork air crash have taken place.

President Mary McAleese and her husband Martin were among the mourners at the funeral in Tannaghmore near Kells in Co Antrim of Brendan McAleese.

Mr McAleese, 39, was general manager of a company in Cookstown.

He is survived by his wife Anne Marie and two daughters, Ava and Erin.

Mr McAleese was a first cousin of the President's husband.

Pat Cullinan, a 45-year-old senior partner with accountancy firm KPMG, was buried after requiem mass in St Patrick's Church in the village of Cranagh near Plumbridge in Co Tyrone.

Mourners were led by Mr Cullinan's 83-year-old mother, brothers, sister and his fiancée.

President Mary McAleese was represented by her aide-de-camp.

A spokeswoman for the Health Service Executive said the four being treated are likely to remain there for some time.

They are Heather Elliott, who is originally from Kinsale in Co Cork and now lives in Belfast; Peter Cowley from Glanmire in Co Cork; Brendan Mallon from Bangor in Co Down; and Mark Dickens from Watford in England. 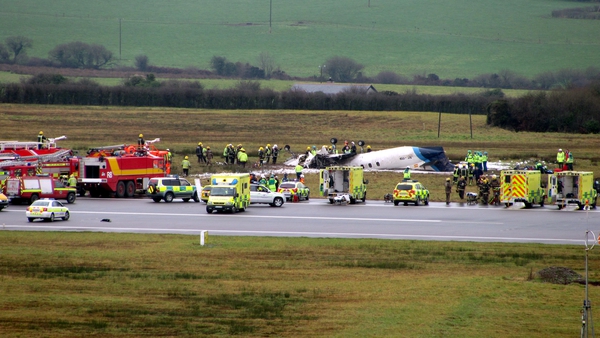