In the second week of the General Election campaign, Fianna Fáil and Fine Gael have criticised each other on the issue of health.

Fine Gael Health Spokesperson, Dr James Reilly, said he was 'amazed and disappointed' that Fianna Fáil's manifesto did not deal with health policy - adding his party was the only one with a 'clear, credible programme' for healthcare reform.

In response, Fianna Fáil said the core issues in its manifesto were economic and it would announce its health policy later this week.

Fianna Fáil's health spokesman Barry Andrews accused Fine Gael leader Enda Kenny of being reckless by announcing a policy to privatise the Irish health system, while 24 hours later not telling the Irish people just how much the proposal would cost.

Micheál Martin said his party would continue its health reforms - he said Fine Gael's health proposals were all about money and would undermine quality of care, particularly in heart and cancer care.

Elsewhere, the main parties were focused on political reform.

Fine Gael published policy documents which would overhaul the political system, reducing the Taoiseach’s salary to €200,000, with a pro-rata reduction in ministerial salaries.

The party also wants to see all Dáil members expenses vouched. As well as banning corporate donations the party says it will lower the maximum amount individuals can donate to political parties.

Fianna Fáil launched its manifesto this morning. It proposes that members of the Cabinet should not be members of the Oireachtas while they serve as ministers.

The manifesto also says the party supports the abolition of the Seanad.

He said that the party supports a mixed system of single-seat constituencies through a system of single transferable votes and a top up national list which will he said ensure proportional national representation.

They include holding a convention to draw up a new Constitution, a Whistleblower's Law to protect those who expose corruption or misconduct, a reduction in allowable political donations to €2,500 to a party and €1,000 to a candidate; and scrutiny of all appointments to State boards by Dáil Committees.

The plan also calls for the abolition of the Seanad and a stronger Dáil, with a 50% increase in sitting days, with a four-day week and a summer recess of six weeks.

New legislation would make ministers and senior civil servants responsible for their decisions and for the management of their departments in the public interest.

Labour wants to have the Attorney General's legal advice to Government published more often, and proposes a new Office of Public Sector Reform, with a Cabinet minister in charge.

Meanwhile, Sinn Féin leader Gerry Adams has refused to rule out abolition of the Seanad. Speaking in Dundalk after handing in his nomination papers, Mr Adams said the House should be 'abolished in its present form'.

Asked whether he supported the Fine Gael proposal of abolishing the Seanad entirely, Mr Adams said as presently constituted the Seanad was not subject to universal sufferage.

What should happen he said is a 'good discussion' about the future of the upper House and then a decision reached and acted upon.

Yesterday, Green Party leader John Gormley said the number of public representatives should be reduced to 120 in the Dáil under his party's proposals for electoral reform.

Kenny will participate in later debate

Fine Gael's Phil Hogan has said that his party leader Enda Kenny will take part in a three-way Leaders' Debate later in the election campaign.

Fine Gael has suggested the three-way debate could be broadcast simultaneously on RTÉ and TV3.

Micheál Martin and Eamon Gilmore are also due to take part in a debate on TV3 tomorrow evening. However it is understood Mr Kenny will not be taking part.

TG4 has also issued an invitation to the three leaders to take part in an Irish language debate. 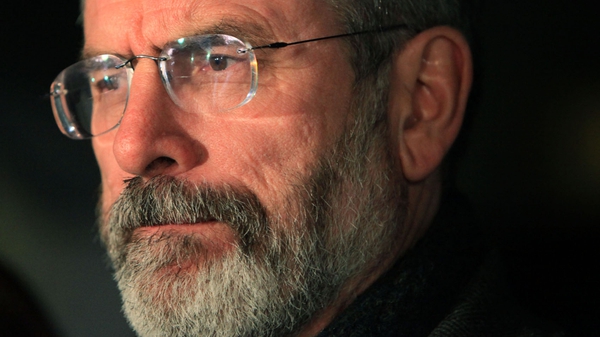 Adams does not accept SF will be in Opposition