Egypt's president gave the first indication he was preparing an eventual handover of power by naming a vice-president for the first time in 30 years after protests that have rocked the foundations of the state.

Hosni Mubarak's decision to pick Omar Suleiman, his intelligence chief and confidant, as his number two is the first time the 82-year-old leader has hinted at a succession plan and may suggest he will not run in an election scheduled for September.

Until five days of unprecedented scenes of popular defiance and chaos across the country, officials had suggested Mubarak would run again. If not him, many Egyptians believed, his son, Gamal, 47, could be lined up to run. This now seems impossible.

Mr Suleiman, 74, has long been central in key policy areas, including the Palestinian-Israeli peace process, an issue vital to Egypt's relationship with key aid donor the United States.

The appointment as prime minister of Ahmad Shafiq also indicated a preference for responding to public demands for change with limited changes in personnel. Mr Mubarak's decision yesterday to sack the government failed to impress protesters.

The speaker of parliament was later quoted as saying that there were no plans to meet demands for early elections.

On the streets of Cairo, soldiers repelled protesters who attacked a central government building. But elsewhere in the city, troops took no action as people stayed on the streets despite warnings to stay indoors after 4pm (3pm Irish time).

The protesters, many of them young urban poor or students, are angry over endemic poverty, corruption and unemployment as well as the lack of democracy in the most populous Arab nation.

The unrest, which follows the overthrow of Tunisian strongman Zine al-Abidine Ben Ali two weeks ago in a popular uprising, has sent shock waves through the Middle East, where other autocratic rulers may face similar challenges.

Earlier today, several thousand people flocked to central Cairo's Tahrir Square, waving Egyptian flags and pumping their arms in the air in unison. ‘The people demand the president be put on trial,’ they chanted.

In Alexandria, police used teargas and live ammunition against demonstrators. Protests continued in the port city after curfew, witnesses said.

According to a Reuters tally, at least 74 people have been killed during the week. Egyptian officials have put the death toll at 62. Medical sources said at least 1,030 people were injured in Cairo.

Clashes have also occurred in Suez, near the eastern terminal of the canal linking Europe and Asia.

The Department of Foreign Affairs has reminded Irish tourists who are travelling to Egypt to exercise caution and avoid all demonstrations.

The Department has urged people to follow the instructions of the local police.

Up to 200 Irish citizens are registered as living in and around the Cairo area and all have been accounted for.

The Irish Embassy in Cairo is monitoring the situation.

The Department is warning Irish tourists that there have been disruptions to mobile phone and internet communications, and said these may continue. 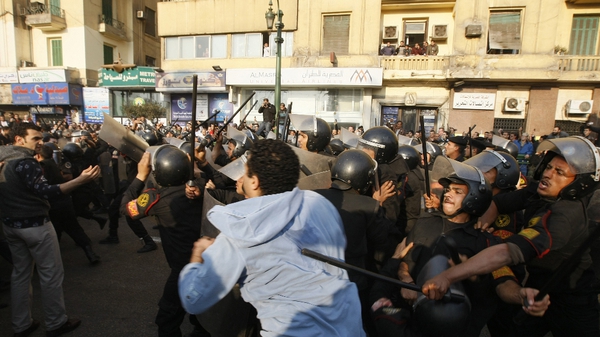