A blizzard has battered the northeastern coast of the United States, dumping up to 29 inches (74cm) of snow and disrupting air and rail travel.

New York City, eastern New Jersey and western Long Island have been hardest hit by the storm, which blew up the Atlantic Coast last night, unleashing powerful winds and brings cities to a standstill.

A number of flights to the US did did take off from Irish airports this afternoon.

The US National Weather Service had issued blizzard warnings last night from Maine to New Jersey with winter storm warnings in effect for almost 1,600km of the US east coast.

Six states have declared a state of emergency as the first widespread blizzard of the season hit Americans returning to work after one of the busiest travel weekends of the year.

Nearly 60,000 Massachusetts residents are without power after the storm ploughed across that northeastern state.

Skies started clearing just before the morning commute, providing ideal play conditions and an extra treat for children after school was cancelled.

But there was no fun for thousands of people stranded in the airports. At Philadelphia International Airport, some 1,200 stranded passengers were given pillows and blankets from the airport's assistance programme.

New York subway traffic has been sporadic and Amtrak services and the Metro-North commuter rail connecting the city to its northern suburbs were suspended last night.

One casualty of the storm was the NFL football game between Philadelphia Eagles and Minnesota Vikings in Philadelphia.

The move sparked criticism, especially as the sport loves to glorify games in snow.

'It's an absolute joke,' Pennsylvania Governor Ed Rendell, a big Eagles fan, told Fox News. 'I was looking forward to this. It would have been a real experience. This is what football is all about.' 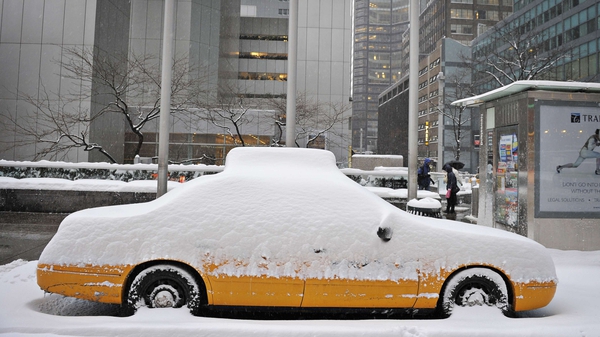