The Dáil has debated the Social Welfare Bill that will give legislative effect to the measures announced in Budget 2011.

Minister for Social Protection Éamon Ó Cuív indicated to the House that disability benefits were being targeted for major reform with different levels of payment depending on the levels of disability.

During the debate, Labour's spokeswoman on social protection, Roisin Shortall described the new universal social charge as nothing more than a new tax that hits low income workers and she said it regressive in the extreme.

Fine Gael's Michael Ring said the Budget was outrageous and attacked the most vulnerable.

Deputy Ring called for support for his party's amendments to reverse a number of the welfare cuts.

Earlier, Taoiseach Brian Cowen strongly criticised the Opposition, saying Fine Gael's claim that it would not raise taxes next year and criticisms by Labour of welfare cuts were not credible.

Speaking on RTÉ’s News At One, Mr Cowen said Fine Gael claimed it would not raise taxes next year and said Labour criticised every welfare cut.

'You cannot credibly and honestly say to the people that we can get out of this problem by not raising income tax and not cutting welfare.'

Mr Cowen said he apologised unconditionally to the Irish people for the situation in which the country finds itself, saying Government policy had been based on the best advice available at the time.

But he said it was his job now to get the country moving to where it needed to be.

Mr Cowen insisted he would lead Fianna Fáil into the next General Election.

The Taoiseach said Labour leader Eamon Gilmore 'should stop pretending to the Irish people that his party has some alternative to the National Recovery Plan, which includes the front-loaded €6bn cut in the deficit.'

He said there was no alternative option of a €4.5bn cut, as suggested by the Labour Party.

Mr Cowen said the assistance agreed with the European Union and the International Monetary Fund would be suspended if Labour were to draw back from any aspect of the agreement without putting forward a full equivalent alternative.

He said if we wish to borrow to maintain our public services, such as State pensions, unemployment benefits, schools and hospitals, we must keep strictly to the agreed parameters of the National Recovery Plan.

Amid much shouting in the Dáil chamber earlier, Mr Cowen said there was total incoherence in Opposition policies.

Mr Kenny told the Taoiseach that Fine Gael's policies would have eliminated the need for income tax increases.

He said the Budget contained 'booby traps and landmines' that would go off in people's homes over the next year.

Mr Gilmore said the Taoiseach was presiding over a two-tier society in which social welfare recipients, such as widows, carers and the blind, were having their incomes cut for the second time in two years, while tax exiles were getting away with paying nothing.

The Taoiseach said all non-residents who have business in the State paid taxes whether they were resident here or not.

He told the Opposition parties that their policies did not add up.

Mr Kenny also said Fine Gael's only allegiance was to the people and it is not tied to big money and business.

He said the Government was 'flattened, out of breath and out of time'. He said the middle and lower income families have been fleeced by Fianna Fáil and it had lied to the people.

Last night, TDs passed the urgent financial resolutions arising from the Budget, including changes to the tax code, and the excise duty increases on petrol and diesel.

The debate and voting on the Financial Resolution arising from the Budget finished shortly after midnight.

There had been speculation that the Government's majority could be under threat, but in the end it comfortably carried all the contested votes, with Independent TD Joe Behan joining the deputies who normally support the Government.

Measures that come into effect in the New Year include many changes to the tax code - including the reduction of the €10 travel tax to €3 - and changes to tax bands and credits, which will bring more people into the tax net and put more people on the higher rate.

A new stamp-duty system was also passed - with 1% on homes up to €1m, and 2% on those worth more than that - and a number of tax reliefs were abolished.

The Social Welfare Bill is due to be passed by tomorrow. 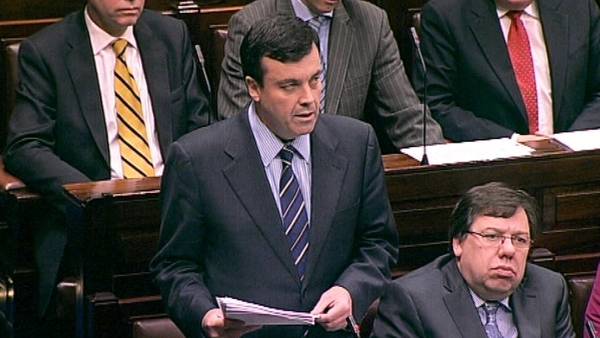