Sinn Féin is attempting to form a new technical group in the Dáil after Pearse Doherty's victory in the Donegal South West by-election yesterday.

It is understood Mr Doherty will discuss the proposal with Independent TD Maureen O'Sullivan over the weekend.

The group of seven TDs would be entitled to extra speaking time in the Dáil if an agreement is reached.

Sinn Féin could also move its motion of no confidence in the Government.

There are tactical arguments against such a move, as it may encourage Government TDs to close ranks, but it would certainly put pressure on the Government and the other Opposition parties.

Mr Doherty was elected after the fourth count without reaching the quota.

He took the seat vacated by Fianna Fáil’s Pat The Cope Gallagher, who was elected to the European parliament in June 2009. 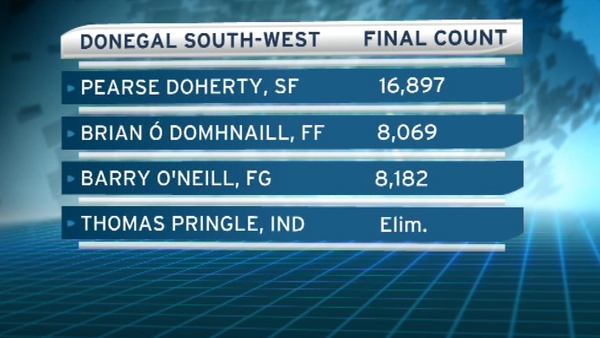 Donegal by-election count: as it happened