A stampede on a bridge in Cambodia's capital has left at least 378 people dead after thousands panicked on the last day of a festival marking the end of the rainy season.

The stampede began late yesterday on a small bridge lined with lights connecting Phnom Penh to an island where a crowd had gathered to celebrate the water festival and watch a concert.

Survivors said panic set in when shouts went up that several people had been electrocuted.

Police said some people also shouted that the bridge was about to collapse as thousands of people were heading back to the city centre.

The victims suffocated or were trampled and some survivors said they were wedged into the crowd of living and dead for hours. Police sprayed water so survivors could drink, some said.

'People were shouting that someone had been electrocuted, to run back,' Touch Loch, 18, told Reuters.

'I fell and people stepped on me until I passed out. When I woke I was here in hospital.'

'People were crying for their fathers and mothers.'

State television said at least 240 of the dead were women.

Khon Sros, 19, said from her hospital bed some people had leapt off the bridge to escape but she had been pinned in the crowd from her waist down until police pulled her out.

'One man died near me. He was weak and didn't have enough air.'

Touch Theara, 38, said she had been stuck in the crowd for three hours: 'I thought I was dead ... Police sprayed water at us. We were just opening our mouths to drink.'

Prime Minister Hun Sen apologised for the disaster in which at least 700 people were hurt.

He ordered an investigation as television footage showed relatives weeping over the bodies of the dead piled one on top of the other.

'This is the biggest tragedy in more than 31 years after the Pol Pot regime,' he said, referring to the Khmer Rouge, whose agrarian revolution from 1975-1979 killed an estimated 1.7m people in Cambodia under the command of Pol Pot.

He declared Thursday a day of mourning.

Emergency crews carried bodies and laid them out in rows for identification.

Many bodies were piled into ambulances and trucks and taken to city hospitals where paramedics searched for signs of life.

Hospital wards and corridors were packed with injured.

Mr Hun Sen urged the country to remain calm and ruled out terrorism as a cause for the catastrophe, which took place on the third and final day of the Bon Om Touk water festival.

The festival is the biggest carnival in a city that was for years starved of entertainment as it recovered from Khmer Rouge rule and years of war and isolation. 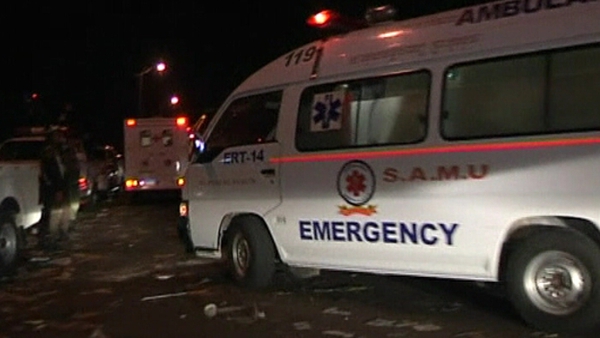