It is ‘overwhelmingly in Britain's national interest’ for Ireland to have a stable economy and banking system, British Chancellor George Osborne said today.

Updating MPs on British involvement in the international bailout of the Irish economy, Mr Osborne said the country was a major trading partner with a banking sector ‘interconnected’ with the UK's.

The UK's total contribution to the support package is thought to be around £7bn but in a statement to the House of Commons Mr Osborne said it was right to help a ‘friend in need’.

Mr Osborne told the Commons: ‘The United Kingdom, alongside the International Monetary Fund, the European Union, the eurozone and other member states is participating in the international financial assistance package for Ireland announced last night.’

‘The current Irish situation has become unsustainable. Their sovereign debt markets had effectively closed and had little prospect of reopening.’

Mr Osborne revealed that ‘intensive private discussions’ had been taking place with the G7, IMF and EU on plans for a bailout before the request from Ireland was officially made.

UK shadow chancellor Alan Johnson said Labour was ‘in principle content to support a role for the UK in assisting Ireland to secure economic stability’.

Ireland is a significant export market for the UK and British banks - already bailed out by the British taxpayer - have large exposures to Irish debt.

A Swedish loan to Ireland would be given in addition to funds the country gets from the IMF and the EU.

Mr Borg said: 'We are offering a loan similar to those given to Iceland and Latvia.

'No final decision has been taken on the amount of the loan but the contribution could be at the same level as the loans to Iceland and Latvia.

'Sweden is a small country dependent on exports, so stability is crucial to us.'

Sweden is not part of the eurozone and Mr Borg said the loan to Ireland would carry an interest rate of about 3%. 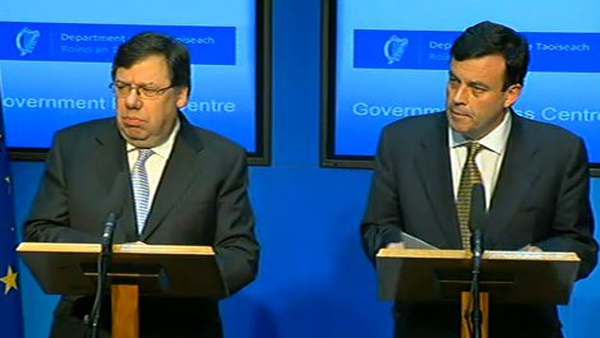