The Taoiseach has said he does not expect the cuts in the Government's four-year economic plan to be more severe as a result of the discussions taking place between Irish officials and representatives of the International Monetary Fund, the European Commission and the ECB.

Brian Cowen said the 'parameters' of the Government's plan had already been met with 'broad approval' from Commissioner Olli Rehn and 'others'.

He said the Government would continue to work with the IMF and EU officials to insure stability to the euro generally and to insure access to funds in a way that is not at the prohibitive rates currently available to Ireland on the markets.

Mr Cowen said the talks, which resumed this morning, were in the interests of the country and its taxpayers.

He added that the issue of Ireland's low corporation tax had not been discussed at the talks and said taxation was a matter for the Government and that the country has 'a very transparent tax rate'.

The Taoiseach said the four-year plan was at a 'very well advanced' stage.

A Cabinet meeting is due to take place tomorrow.

Meanwhile, Fine Gael leader Enda Kenny has repeated his call for the Government to resign over what he described as the 'scandalous' situation facing the country.

Mr Kenny accused the Government of treating the Irish public like 'fools'.

He said the Government had 'no mandate' to be involved in ongoing discussions on a possible Irish bailout and that the country could only rebuild itself if a 'clean-out' took place.

Enda Kenny, who was speaking in Donegal Town today to support the party's candidate in the upcoming by-election in Donegal South West, said he would be happy to see a General Election, even if it was held on Christmas Eve.

Asked whether he was critical of Taoiseach Brian Cowen's decision to travel to Donegal today to campaign, Fine Gael's Finance Spokesperson Michael Noonan said the Taoiseach was no longer central to the talks taking place in the capital.

He said Mr Cowen 'thought he could hide out on an island, away from the anger of the Irish people'. 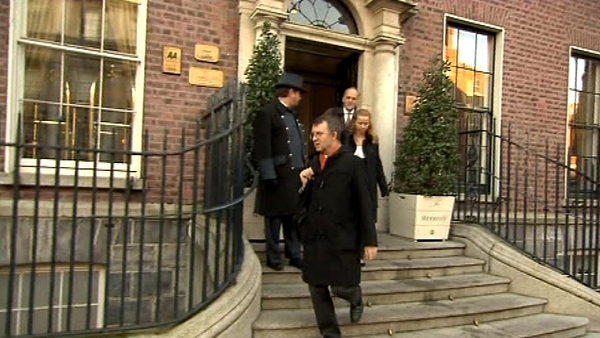