Government ministers insisted Ireland's 12.5% corporation tax is 'non-negotiable' as a package worth tens of billions of euros from the European Union and the International Monetary Fund for the banks was discussed.

Eurozone neighbours are pressing to raise the tax rate as part of negotiations for a rescue package, but the Government is resisting and argued that it is crucial for foreign investment.

Fine Gael leader Enda Kenny today said his party intended to raise a motion in the Dáil next week calling for the current rate of corporate tax to be maintained.

Minister for European Affairs Dick Roche echoed that comment, saying that 'it is certainly not up for negotiation'.

'There has been some very unhelpful chatter in the background in the last few days about our corporation profit tax. Where would be the sense of destroying one of the great drivers of growth?' he told BBC television.

The UK and Germany have long viewed low Irish taxes as a form of unfair competition and the finance ministers of Austria and France said the corporation tax may have to be raised as part of any deal.

However, Germany's government spokesman Steffen Seibert today said Germany is not pressuring Ireland to accept aid from the EU's safety net and has great confidence in the Government’s plans to tackle its financial woes.

'The German government greatly supports the Irish government's policies and has great confidence in the courageous reform policies contained in the four-year programme it is expected to present in early December,' he said.

Asked whether Germany wanted Ireland to raise its corporate tax rate, he said this was a matter to be decided by the Irish Government.

Discussions would run into next week

Officials from the European Commission, the European Central Bank and the IMF arrived in Dublin yesterday for talks on a possible rescue package.

The Government said discussions would run into next week and Minister for Finance Brian Lenihan told the Dáil it was not yet at the point of requesting a loan.

What was under discussion was 'substantial contingency capital to be made available to back Ireland'.

He insisted the IMF and EU would not have any input into Ireland's budgetary measures, even though EU rules stipulate that assistance programmes can only be granted to governments that sign a strict fiscal conditionality agreement.

In an effort to calm savers, Mr Lenihan said the Government was extending an unlimited guarantee for depositors until the end of next year, six months longer than previously announced.

Irish banks have suffered withdrawals from corporate clients and Mr Honohan said 'a steady drain of deposits' had necessitated exceptional funding from the Irish central bank on top of ECB liquidity assistance.

AIB has said the amount of money on deposit at the bank has fallen by €13bn since the start of the year.

Even if Ireland accepts an international bailout, it will be insufficient to calm markets that want to see a permanent anti-crisis mechanism put in place, Greece's finance minister said today.

'Even if Ireland is helped, it cannot prevent the debt crisis from continuing', George Papaconstantinou said at a conference in Frankfurt.

He said investors 'are not convinced that the solutions are there' and 'will focus on other countries: Spain, Portugal.'

'The EU absolutely has to discuss a permanent aid system, or something like that,' said the minister.

The EU created the €440bn European Financial Stability Facility in May at the height of the crisis over Greece, but it runs for only three years.

Greece was forced to take a €110bn rescue package from the EU and IMF when it could no longer raise funds on bond markets except at exorbitant rates.

This week, Greece pledged to raise its Value Added Tax, freeze pensions and cut government waste further in 2011 to meet the terms of its EU/IMF bailout after admitting it will miss this year's deficit reduction target.

Mr Lenihan is due to detail a four-year, €15bn budget-cutting plan next week and the Government will put a 2011 austerity budget to parliament on 7 December. 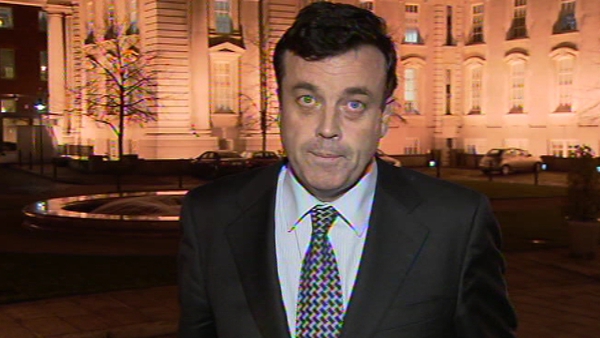