Halliburton used flawed cement in BP’s Gulf of Mexico well, which could have contributed to the blowout that sparked the worst offshore oil spill in US history.

While not absolving BP of responsibility, a White House panel has said heaped criticism on Halliburton's cement job.

Halliburton had run a series of tests that showed the material was unstable in the weeks before the 20 April explosion on the Deepwater Horizon rig, which killed 11 workers and spurred a temporary ban on deepwater US drilling.

In an emailed statement, Halliburton said it is reviewing the report. A BP spokesman declined to comment.

Both Halliburton and BP were aware of flaws in the cement slurry, similar to the one used to seal the mile-deep Macondo well, as early as 8 March, over a month before the spill, ‘but neither acted upon that data,’ according to National Oil Spill Commission chief counsel Fred Bartlit.

‘The fact that BP and Halliburton knew this cement job could fail only solidifies their liability and responsibility for this disaster,’ said Rep Edward Markey, a Democratic lawmaker who has criticised BP and its well partners.

The industry has developed tests to identify faulty cement jobs in offshore wells, but ‘BP and/or Transocean personnel misinterpreted or chose not to conduct such tests at the Macondo well,’ Mr Bartlit wrote.

‘Halliburton (and perhaps BP) should have considered redesigning the foam slurry before pumping it at the Macondo well.’

The report supports claims by BP that it shares the responsibility for the disaster with its Macondo partners, including Swiss-based Transocean Ltd, which owned the Deepwater Horizon rig.

In an interim report BP issued in September, it said Halliburton used an ‘unstable’ cement mixture that allowed hydrocarbons to flow up the drill pipe and onto the floor of the rig, where they ignited.

The resulting spill marred the coasts of four US Gulf states, prompted a ban on new deepwater drilling and left BP's image in tatters in the US, home to 40% of the London-based oil giant's business. 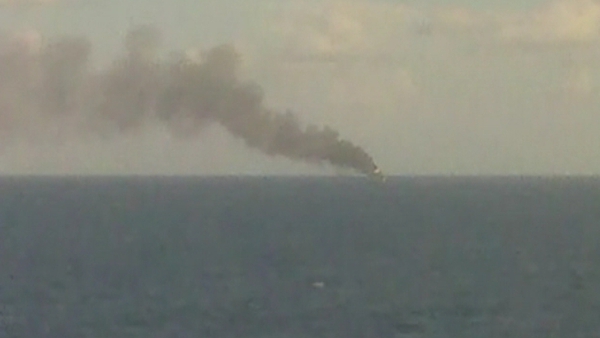 Explosion on oil rig in Gulf of Mexico