The French Finance Minister Christine Lagarde has told RTÉ News that her government's pension reforms must go through.

Speaking in advance of a key senate vote tomorrow on the reform package Ms Lagarde said the reforms were a matter of necessity, of financial equilibrium, and of competitiveness.

It was a matter of making a system sustainable, she said.

She said the government wanted pensions to be paid, it did not want them reduced, or contributions to be increased, so the only variable to play with was the length of time people worked.

They had also taken into account the situation of women who had taken time off work to raise children, they too could retire early she said.

Her comments come on another day of public sector strikes and protests against unpopular pension reforms.

Trade unions riding a wave of voter support are pushing to force President Nicolas Sarkozy, who faces an election in 18 months, to retreat on plans to lift the retirement age to 62 from 60.

At least 1m people demonstrated across France yesterday, the sixth such day of national protest since June.

Sporadic outbreaks of violence flared on the fringes of some marches, notably in the southeastern city of Lyon, raising concerns for the authorities that small groups of agitators were trying to hijack the predominantly peaceful protests.

Most political analysts expect the reforms to pass into law and for the dissent to gradually fizzle out.

After 24-hour stoppages hit the rail and aviation networks yesterday, today’s industrial action is likely to be less severe, however fuel shortages are a major problem.

Nearly one in three of the country's 12,500 petrol stations are dry or running short, forcing the government to tap strategic reserves.

Prime Minister Francois Fillion has promised fuel distribution will be back to normal within days.

Unblocking has already made possible the distribution of millions of litres of fuel, he added.

In addition to strikes at the railways and at the oil refineries, freight truck and delivery van drivers have said they will continue protests that include motorway go-slows.

The national aviation authority thought there would be only limited disruption today after yesterday saw 30-50% of short-haul flights cancelled. 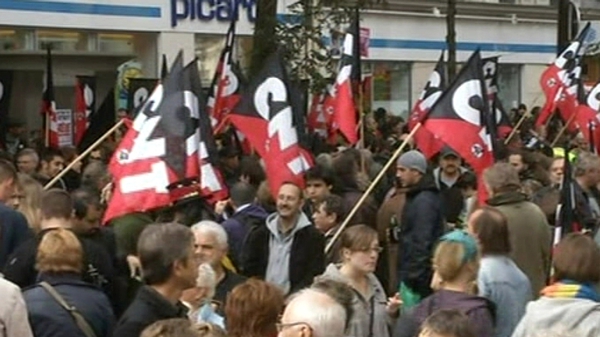