French workers and students have taken to the streets for a sixth day of protests against pension reform, with petrol stations running dry and many flights cancelled.

Airport staff, bus and train drivers, postal staff and cash-in-transit workers joined refinery workers and others in a day of strikes against Nicolas Sarkozy's plan to raise the retirement age to 62.

More than 500,000 people demonstrated on the streets, police said, fewer than on the last comparable day.

But the CGT, France's biggest union, estimated turnout in Paris at 330,000, which it said was equal to the 12 October march. It estimated that some 3.5m nationwide took to the streets.

Police fired tear gas and arrested nine protestors in the city of Lyon who had overturned cars and set one alight.

The ministry said that 1,158 protestors had been arrested at demonstrations since the start of the week, 163 of them this morning.

In some cities, small groups of protestors torched vehicles and there was also scuffling with riot police.

An estimated 1m people demonstrated on Saturday, the last national day of protest.

Today's protest comes on top of week-long strikes at refineries, blockades of some fuel depots and an unrelated oil port strike, which have left hundreds of petrol pumps dry, triggering panic buying and queues of motorists.

The government has been forced to tap strategic industrial reserves.

Mr Sarkozy, who is meeting his German and Russian counterparts for talks in the northern French seaside town of Deauville, told reporters yesterday he would not back down.

'The reform is essential and France is committed to it and will go ahead with it just as our German partners did,' Mr Sarkozy said after talks with German Chancellor Angela Merkel, who urged the French to accept that living longer meant working longer.

Germany voted in 2007 to lift its retirement age to 63 from 62 by 2029 and many other European countries have similarly increased retirement ages, or plan to.

Opinion polls show a majority of French resent the plan to increase the minimum and full retirement ages by two years to 62 and 67 respectively, and feel they are being punished unfairly for a failure in France's social security system.

The unions, which crushed pension and labour reforms in 1995 and 2006 with long-running protests, say they want the bill scrapped and a say in discussing a pension overhaul.

So far the transport strikes have not been severe enough to paralyse France, however the refinery strikes are a serious threat.

As fuel depots dry up, France will become increasingly dependent on strategic reserves, which need to be accessed and trucked across the country.

Mr Sarkozy hopes the Senate will approve his bill by Friday after which it just needs a last vote by a joint parliamentary committee. Unions have vowed to keep protesting regardless.

Flights to and from France and Barcelona in Spain face disruption as a result of the demonstrations. Aer Lingus and Ryanair have advised passengers of schedule changes.

Aer Lingus said it had cancelled one flight from Dublin to Paris Charles de Gaulle today.

The airline also said that customers may experience difficulties in accessing public transport at French airports.

Ryanair said the strike would cause delays and some cancellations for flights operating to and from French airports and those that overfly France.

It said two flights from Dublin, to Nice and Rodez, had been cancelled.

The French Aviation Authority had asked airlines to reduce flights in and out of the country by up to 50% today.

It said that airlines were being asked to reduce flights to Orly Airport in Paris by 50% and to all other airports by 30%.

Also affected by today's strike action is the return flight between Knock and Reus in Barcelona, Spain. 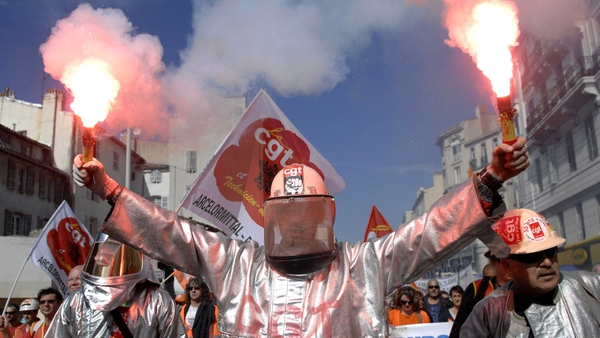