Mr Clegg was in Newcastle, Co Down, last night to address the North-South Parliamentary Forum, where he met political leaders, including Tánaiste Mary Coughlan.

The commitment from the Liberal Democrat leader comes amid claims from Stormont ministers that a major raid on Northern Ireland's capital expenditure budget would break a deal struck during the peace process.

‘The First Minister and Deputy First Minister raised with me in very clear terms their concerns about the possible impact of the deficit reduction plan we are setting out on capital expenditure in Northern Ireland,’ he said outside Stormont Castle.

‘I have said that I will go away with colleagues in the coalition government to look at this.’

He added ‘we understand their concerns, we'll look at them but obviously I can't provided detailed assurances now because everything is still being decided upon before October 20.’

Mr Clegg met DUP leader Mr Robinson and Sinn Féin's Mr McGuinness hours after the Stormont executive joined forces with the Welsh and Scottish administrations to warn the Treasury not to cut too much from their block grants too soon.

Northern Ireland's political leaders have also put an additional argument to the coalition, claiming a cut to their capital budget would break an £18 billion ten-year investment pledge made by the last Labour government as part of the peace negotiations.

The 2006 St Andrews Agreement, which paved the way for the DUP and Sinn Féin to share power, incorporated a joint deal between the British and Irish governments to fund infrastructure projects in the region. 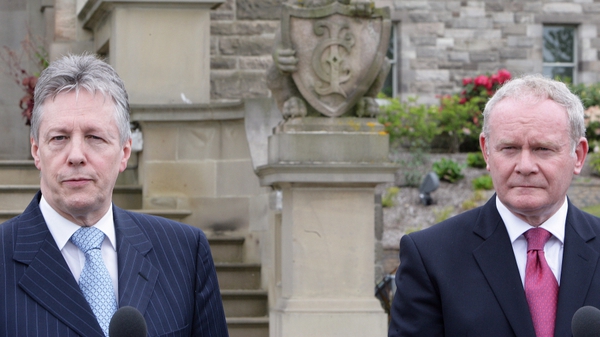