Tánaiste Mary Coughlan has confirmed that she will be travelling to the US, following a pairing agreement with the Labour Party.

Earlier, Labour spokesperson Ruairí Quinn had said he would be prepared to provide a Dáil pairing arrangement with Fianna Fáil to facilitate an official trip, provided his party was satisfied it was a proper mission.

Mary Coughlan looked to have been forced to cancel her visit to a meeting of US career counsellors - organised by Enterprise Ireland to try to attract more students to Ireland - after Fine Gael withdrew its vote-pairing arrangement with the Government.

The Tánaiste spoke with Mr Quinn this evening and a special pairing agreement was facilitated.

'Hopefully matters will now be resolved regarding future pairing agreements' she said.

She will leave for the US tomorrow.

Pairing is an arrangement where a TD of one party agrees with a TD of an opposing party not to vote on a particular matter.

It is designed to take account of the need for TDs to be absent from the Dáil, for example to attend to ministerial or constituency duties.

Speaking earlier on RTÉ's News At One, Mr Quinn said he wanted to meet the Tánaiste on the issue, but said he believed she should be facilitated, because the provision of jobs was vital to the country.

'As a former Minister for Enterprise, I have led missions such as this and I know the potential they can have to deliver jobs,' he said.

The Tánaiste said the trip was arranged from before she was appointed Minister for Education.

Ms Coughlan said the Fine Gael decision would be disruptive, but the Government still had a majority and she would also continue to sell Ireland abroad.

However, Fine Gael leader Enda Kenny said that his party would not tolerate a situation where Ministers were given discretionary powers to travel all over the world.

He said the Minister wanted to run away from answering serious questions about FÁS - for which she has responsibility.

Enterprise Ireland Chief Executive Frank Ryan said its plan was for the Tánaiste to attend education fairs in Boston, St Louis and Chicago.

On Saturday, backbench Fianna Fáil TD Mattie McGrath said he could not continue to give his support if cuts in Clonmel Hospital went ahead.

Earlier, Fine Gael Education Spokesman Fergus O'Dowd defended the pairing decision, saying Minister Coughlan had to be 'personally accountable' to the Dáil on issues such as spending at State training agency FÁS.

Mr O'Dowd said the party would provide cover for Ministers going on European Union business, but other votes would not be covered.

Minster O'Keeffe said 'the Government has lost an opportunity to attract more revenue-generating overseas students to Ireland and to create jobs here at home by targeting US investment opportunities.

Green Party leader and Minister for the Environment John Gormley said Fine Gael is putting the party ahead of the country.

Speaking this morning, he said it has always been in place to facilitate ministers doing their work properly and representing Ireland abroad.

Minister for Justice Dermot Ahern said TDs who have up to now supported the Government will have to decide whether or not they want to bring the Government down on one issue.

Fine Gael has also announced that it intends to move the writs for the three outstanding bye-elections in Dublin South, Donegal South West and Waterford when the Dáil resumes on Wednesday. 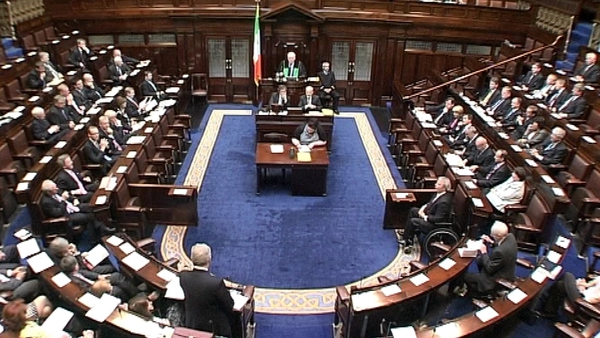