The National Treasury Management Agency has raised €1.5bn worth of fresh borrowings in a successful but expensive auction.

Markets have been especially hostile to Ireland in recent days and weeks over concerns about the country's ability to pay its bills.

Many commentators have described negative market sentiment towards Ireland as exaggerated and ridiculous.

Today was a crucial excursion for the National Treasury Management Agency into the debt markets given the level of adverse economic comment suffered by the country in recent days.

Bond yields on Irish debt are at their highest since the formation of the euro and there is a record difference between what we pay and what Germany pays for government debt.

The NTMA had wanted to raise between €1bn and €1.5bn. There was plenty of interest and there were plenty of buyers looking to buy Irish debt, so the offer was well over-subscribed.

The taxpayer will pay just over 6% on €1bn of eight-year bonds compared to the 5% they paid at the last such bond auction in June.

The NTMA also raised €500m in four-year bonds, which command an interest rate of 4.78% compared to 3.6% in a similar auction last month.

The fact that the taxpayer must dig deeper to cover new debt issues underlines the uncertainty the markets feel about our exposure to losses at Anglo Irish Bank, our ability to successfully cut spending and to raise new revenue from a dwindling tax base.

The NTMA said it plans to proceed with further auctions of Government bonds later this year.

NTMA Director of Funding and Debt Management Oliver Whelan said the money raised in further auctions would be needed by Ireland next year.

A number of MEPs from the European Parliament's economic affairs committee have reacted to the situation facing the Irish economy and the rising bond yields.

They were speaking on the eve of a vote on the creation of new European supervisory system designed to prevent hidden risk in the banking and financial services sectors from posing systemic dangers across the EU and beyond.

German Green MEP Sven Giegold said that if Ireland needed to seek help from the €750bn bailout fund, set up at the height of the Greek crisis in the spring, then the German public would want Ireland in return to start contemplating harmonising its corporate tax rates with the rest of Europe, which he described as a 'privilege' and 'an illegitimate preference'.

Mr Giegold said he was very alarmed by the rise in Irish bond spreads because they could invite speculators in a way, he said, which drove the Greek crisis in the spring.

He said, however, there was an excessive tendency in the bond market, but it was not fully rational given the size of Ireland's reserves.

French liberal MEP Sylvie Goulard said the Irish economic and banking crisis was confirmation of the need for a European analysis of risks that can affect individual economies.

MEPs will tomorrow vote on the establishment of a new European Systemic Risk Board (ESRB) and three new European Supervision Authorities (ESAs) designed to monitor and prevent risks in the banking and financial services sector, including pensions, insurance and securities, as they evolve.

The vote is the culmination of months of negotiation between the European Parliament and member states. 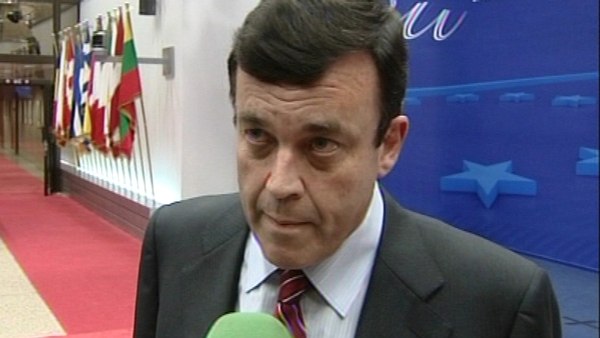