The Government has decided that Anglo Irish Bank will be split into a Funding Bank and an Asset Recovery Bank.

In a statement, the Government rejected Anglo Irish Bank management's plan to split the bank into a good bank and bad bank, but decided on a variation of that proposal.

Meanwhile, Taoiseach Brian Cowen has said the final bill for Anglo Irish Bank should be known by the beginning of October after detailed work by the Financial Regulator Matthew Elderfield.

Speaking on RTÉ’s Six One News, Mr Cowen said the Government was anxious to bring finality to this matter and described today's announcement as a ‘strategic decision’.

He said he would not be drawn on the overall cost which management at the bank has estimated will cost €25bn. Asked could the final figure be as much as €35bn, Mr Cowen said he would not get into that as it was not helpful.

Minister for Finance Brian Lenihan said the Government's announcement that Anglo Irish Bank will be split into two will provide certainty about the bank's future.

Minister Lenihan said a resolution of what he called 'our most distressed institution' was essential to the promotion of confidence and stability in the Irish financial system.

Current depositors will become customers of the funding bank, which will continue as a regulated bank. It will also be able to take new deposits, but will not be giving out any loans.

The asset recovery bank will eventually be sold or partly sold or its assets will be run off over a period of time.

The Government says the guaranteed position of depositors will be unchanged by the new arrangements and no action is required of them as a result of today's announcement.

The depositors will become customers of the funding bank which will be fully capitalised and continue as a regulated bank.

‘In order to restore the reputation of the Irish Financial System it is essential to bring finality to the problem of Anglo Irish Bank - our most distressed institution', a Department of Finance statement said.

Anglo Irish Bank said it welcomed the certainty brought by today's decision. The bank pledged to implement the new plan, saying it would work closely with the Government and other State agencies to deliver the detailed proposals to the European Commission.

It said the funding bank 'would focus on maintaining a viable funding base in support of the recovery bank's needs'.

He said the savings aspect of the Government plan was much more limited than the one the bank was proposing.

Asked if it would be more expensive than the €25bn estimated by the bank, Mr Dukes said this would depend on the view NAMA took with the discounts.

Asked if the plan was a winding-down of Anglo over ten to 15 years, he said it was a working out of the loan book.

'No certainty in plan'

Reacting to the decision, Fine Gael Finance Spokesman Michael Noonan said there was no certainty in the plan for Anglo Irish Bank announced by the Government.

He said what the markets needed was certainty and under the plan, we still do not know what the overall cost to the Irish taxpayer would be or how much more would be added on to the national debt.

Speaking on the Six One News, Mr Noonan said under the plan, neither of the two entities are going to lend.

He said the plan would now be submitted to Brussels but would not be sanctioned until 2011, which he said was too late.

The European Commission has said it welcomes the proposal, but it said further clarifications were needed before a final decision could be taken.

In a statement, EU competition commissioner Joaquin Almunia noted that the Commission had already authorised some €25bn in State recapitalisations 'which obviously creates distortions of competition'.

The Commissioner also said he was aware of the situation of the Irish financial sector and understood it was necessary to continue, for the time being, with government guarantees also for short-term bank liabilities.

Elsewhere, Fitch Ratings Senior Analyst Chris Pryce said he did not think it would make much difference because it had been broadly anticipated by the markets.

However he said the move would bring us a little closer to getting some sort of certainty over the future of Anglo Irish Bank. 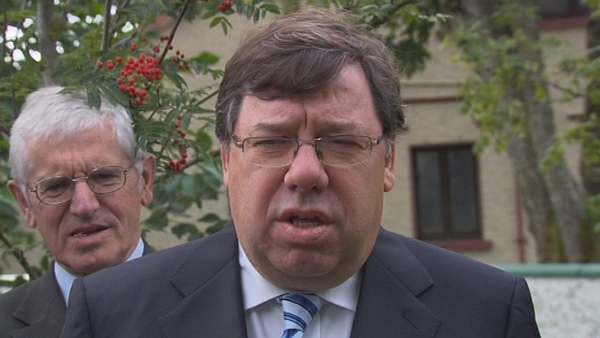