A British woman has been arrested and charged with indecency after walking through a Dubai shopping mall wearing a bikini.

The British Foreign Office confirmed the woman was arrested and charged, but the charges have since been dropped.

The holidaymaker is believed to have been arrested after a complaint that she was dressed indecently in the Dubai Mall.

The mall is the world's largest shopping centre, with more than 1,200 stores, and is part of the Burj Khalifa complex.

It is believed the woman walked through the mall wearing a revealing top, attracting the complaint from a local woman.

She then apparently stripped down to a bikini, prompting her arrest, the Daily Mail reported.

A spokeswoman for the British Foreign Office confirmed the woman had been arrested and charged with indecency at the mall.

This is not the first time a British tourist has fallen foul of Dubai's strict laws.

Businessman Vince Acors and publishing executive Michelle Palmer received three-month jail terms after being convicted of having sex on a beach in July 2008.

Charlotte Adams, 26, and Ayman Najafi, 24, were jailed for a month earlier this year for kissing in a restaurant.

Advice on the British Foreign Office website reminds tourists visiting the United Arab Emirates that local laws reflect the fact it is an Islamic country.

It says: ‘You should respect local traditions, customs, laws and religions at all times and be aware of your actions to ensure that they do not offend other cultures or religious beliefs.'

Ireland's Department of Foreign Affairs website says that: 'Women should dress in a modest way, particularly in Sharjah and Ajman emirates where Islamic law is rigorously enforced. Clothes should cover the tops of the arms and legs, and underwear should not be visible.

'Public displays of affection are frowned upon, and there have been several arrests for kissing in public. Sex outside of marriage is illegal, as is cohabitation, adultery and homosexual behaviour.

'Swearing or making rude gestures is considered an obscene act and offenders can be prosecuted.' 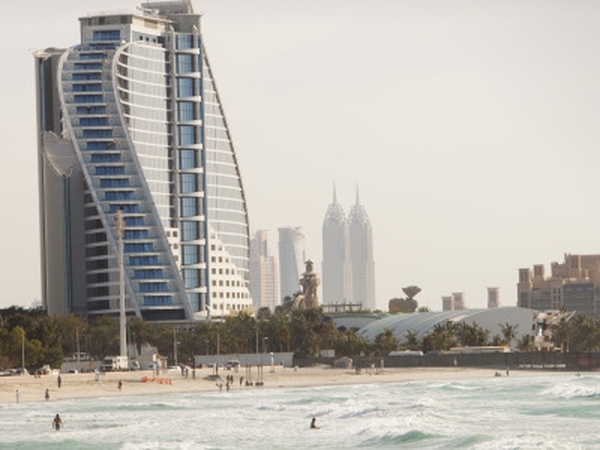