The Mayor of Duisburg, Adolf Sauerland, has ordered an inquiry into the cause of a stampede at a music festival in which at least 19 people died and 342 were injured.

Police had been trying to stop people reaching the parade area at the Love Parade because of overcrowding when the stampede began.

A city spokesman, Frank Kopatschek, rejected claims that the event was badly planned.

An estimated 1.4m ravers attended the one-day event, according to organisers.

Focus magazine quoted the founder of the Love Parade, who goes by the name of Dr Motte, as saying: ‘The organisers are to blame ... they showed not the slightest responsibility for people.’

German newspaper Bild asked on its website: ‘Why did the police let people carry on the party?’

‘In the run-up to the event, we worked out a solid security plan with the organisers and everyone involved, he said.

‘The investigations that have already been launched must uncover the precise course of events.’

German President Christian Wulff expressed sympathy in a statement and Chancellor Angel Merkel sent a message of condolence to the relatives of the victims.

'These young people went to party and instead found death and injury. I am appalled and saddened by so much suffering and pain,' her statement said.

The organiser of the festival said that there would be no more Love Parades.

'The Love Parade has always been a joyful and peaceful party, but in future would always be overshadowed by yesterday's events,' Rainer Schaller said.

'Out of respect for the victims, their families and friends, we are going to discontinue the event in the future, and that means the end of the Love Parade.' 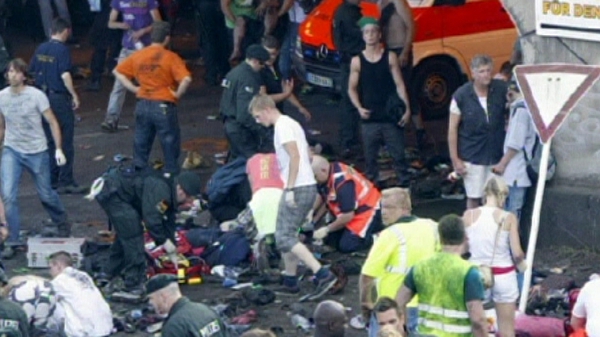