Police in England searching for suspected gunman have set up a two-mile exclusion zone around the village of Rothbury near Norfolk in Northumbria.

Raoul Moat, a former prisoner, is suspected of shooting three people, one fatally.

Today police said that two people they believed had been taken hostage have now been arrested as part of the investigation.

The men have been arrested on charges of conspiracy to commit murder when they were found walking in a village north of Newcastle today.

Detectives said Mr Moat was still at large but a car he is believed to have been driving had been located in Rothbury and the 'net is closing' on the gunman.

Earlier, police shut down a 3km area around a village.

Residents of Rothbury were warned to stay indoors and people were advised not to travel to the area.

In a statement, Northumbria Police said: 'Numerous resources are being deployed to the area to reassure the public and to carry out an effective search.'

'The public may experience some disruption and we are seeking their patience and cooperation.'

It emerged yesterday that police were warned Mr Moat may have been planning to harm his ex-girlfriend on Friday, the day before he allegedly shot 22-year-old Samantha Stobbart and killed her new boyfriend, Chris Brown.

37-year-old Mr Moat, a former nightclub bouncer, mistakenly believed Ms Stobbart was having an affair with a police officer.

He is understood to have fired at Ms Stobbart, with whom he had a six-year on-off relationship, through the living room window of a house in the Scafell area of Gateshead.

Moments later 29-year-old Mr Brown is believed to have left the property, only to be struck down around 50m from the front door.

The next day the fugitive also allegedly shot and injured Pc David Rathband. 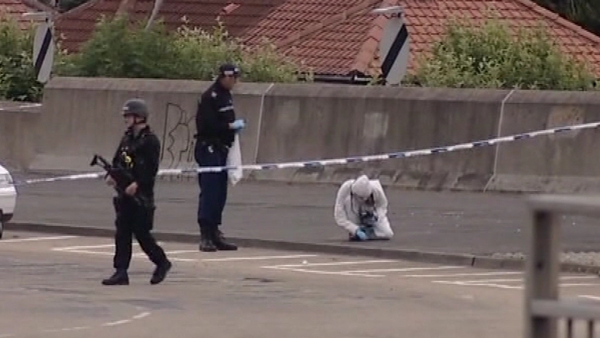