Poles have been voting for a new president in an election that will help shape the pace of economic reforms in the former Communist state.

The election was called after the death of President Lech Kaczynski and much of the country's political and military elite in a plane crash in Russia on 10 April.

The two frontrunners, both Catholic conservatives espousing family values but divided on many other issues, are far ahead of the other eight candidates in opinion polls.

The winner will serve a five-year term as head of state.

An early exit poll showed liberal Bronislaw Komorowski topped the first round with 40.7% of the vote over conservative Jaroslaw Kaczynski, Lech Kaczynski's twin brother, with 35.8%.

Jaroslaw Kaczynski has fought an effective campaign based on calls for solidarity in a time of national disaster, but Bronislaw Komorowski of the centrist ruling party, Civic Platform (PO), looks set to win.

Grzegorz Napieralski of the leftist opposition SLD, heir to the once mighty Communist Party, will come a distant third, according to opinion polls.

Mr Komorowski is unlikely to secure the 50% of votes he needs to win, however, forcing a run-off on 4 July.

Around 30m Poles in a total population of 38m are eligible to vote.

Turnout in the 2005 presidential election was only about 50% and only slightly better, at 54%, in the last parliamentary election in 2007.

In Poland, the government sets policy but the president can veto laws, appoints many key officials and has a say in foreign and security policy. 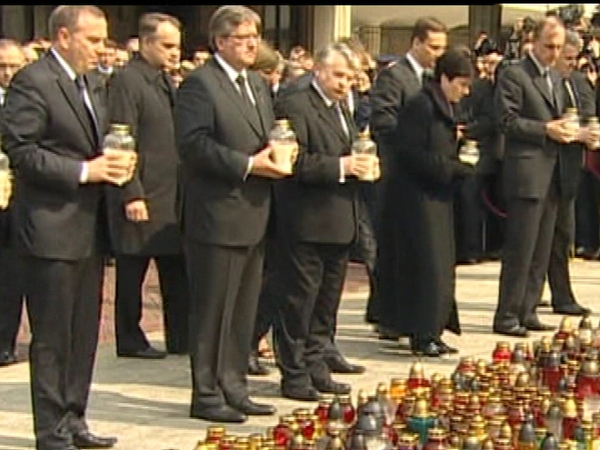