Northern Ireland's Public Prosecution Service has said it is investigating, along with Crown prosecutors, whether some witnesses committed perjury at the Bloody Sunday inquiry.

Read the report of the Inquiry | Further coverage of the report

In a statement, the PPS said it had received a copy of the Saville Report 'which refers to certain witnesses providing evidence to the inquiry which was knowingly untrue.'

The Saville Report into the atrocity in Derry in 1972 - published yesterday - said some of the British soldiers who opened fire on crowds at a civil rights demonstration later lied about their actions.

Michael Mansfield QC, counsel for the families of some of the victims, has already urged prosecutors to consider bringing charges against soldiers accused of lying to the inquiry.

Mr Mansfield said that while witnesses to the inquiry were given immunity from prosecution if they incriminated themselves in evidence, that did not cover false testimony.

He said: 'Given the strength and clarity of the conclusions ... the Director of Public Prosecutions should consider whether it is so serious - because the rule of law has been flagrantly breached on this occasion by a number of soldiers on a number of UK citizens - that consideration should be given to a prosecution.'

Northern Ireland First Minister and DUP leader Peter Robinson has said he accepts the conclusion of the Saville Report that what happened on Bloody Sunday was wrong and unjustified.

Speaking on RTÉ's Morning Ireland, DUP MP Jeffrey Donaldson said he was not in favour of prosecutions arising from the Saville Report.

Elsewhere, Taoiseach Brian Cowen has met some of the relatives of the victims of Bloody Sunday in Government Buildings today.

He has agreed to proposals from all Opposition parties to set-aside time next week for statements on an all-party motion on the report.

All party leaders welcomed the publication of the report and the declaration that all the victims were innocent.

The Taoiseach said that it was now a matter for the Northern Ireland authorities to decide on the matter of prosecutions.

Sinn Féin's Caoimhghín Ó Caoláin suggested that the families of the victims should be invited to the visitors' gallery in the Dáil for those statements.

Earlier, family members of the victims met the leaders of the three Protestant churches in Derry this morning at Rossville Street in the city.

Church of Ireland Bishop Ken Good and the heads of the Presbyterian and Methodist churches joined relatives at a memorial to the dead.

The religious leaders said they hoped the Saville report presented a challenge and an opportunity for new and closer relationships within the wider community.

The report of the Saville Inquiry, which was published yesterday, ruled that all those who were killed or wounded when British troops opened fire in Derry on 30 January 1972 were innocent.

The 5,000-page report said that British soldiers were solely to blame for the deaths of 14 people and injuries to 13 others. 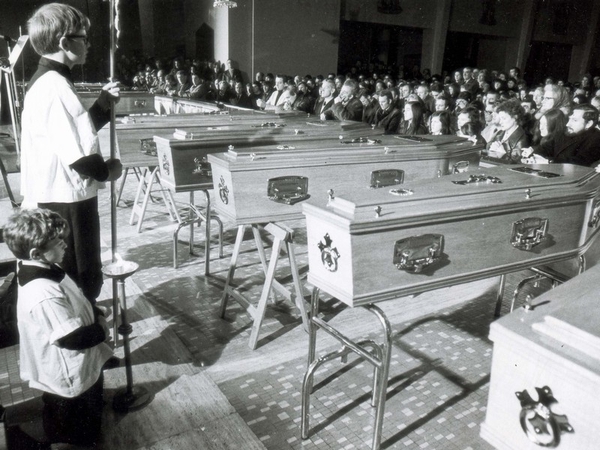