Pfizer is to cut 275 jobs in Newbridge, Co Kildare, with a further 510 jobs to go if buyers are not found for plants in Dublin and Cork.

The IDA is to begin searching for organisations to take over facilities at three Pfizer plants. If a buyer is not found, 210 jobs will be lost at Dún Laoghaire, 225 at Loughbeg and 75 at Shanbally.

Pfizer made the announcement this afternoon as part of a restructuring of its operation. The pharmaceutical giant said its merger last year with Wyeth means a number of positions have been duplicated.

The company said it was committed to making a 'concerted effort' to sell the sites it proposes to close as ongoing operations.

'We have been successful in this regard before having recently sold our animal health plant in Sligo and our Loughbeg API plant, preserving jobs at both locations,' said Paul Duffy, the company's vice president of manufacturing for primary care and oncology.

'We are keenly aware of the impact these types of changes have on employees and their families,' Mr Ricciardi said.

'We will provide support to our colleagues who lose their jobs so that their transition to new careers is as smooth as possible.'

The company said it will cut 6,000 jobs, or 18% of its global workforce, at its 78 manufacturing plants over the next five years as it consolidates operations following last year's purchase of smaller rival Wyeth.

Pfizer said in a statement today that it would end operations at eight plants in Ireland, Puerto Rico and the US by late 2015 and reduce activities at six factories in those countries as well as in Germany and Britain.

Pfizer had 40 manufacturing sites before acquiring more than three dozen Wyeth facilities in the October merger. That takeover was worth $68bn (€55bn).

Pfizer is counting on savings from the Wyeth merger to help offset expected plunging sales of its $12 billion-a-year Lipitor cholesterol fighter, which begins facing generic competition late next year.

Tánaiste Mary Coughlan has told the Dáil that the job losses at Pfizer are nothing to do with the Irish economy, but were caused by the overcapacity generated by the company's merger with Wyeth.

Ms Coughlan also confirmed that she had met with the chief executive of Pfizer during the merger process, to impress on him the Government's desire to retain the jobs.

IDA Ireland is to begin the process of finding other organisations to take over the facilities at Dún Laoghaire, Loughbeg and Shanbally.

He said he has called in the State's enterprise agencies to plan for retraining and re-employment for the workers affected.

‘I have asked IDA Ireland to begin the search for other major players in the life science sector to take over the facilities in Loughbeg and Shanbally in Cork and Dún Laoghaire,’ the Minister said.

‘IDA Ireland has a strong track record in sourcing same-sector replacement industries for vacated facilities and I will be urging the agency to prioritise its endeavours in the cases of the plants in Cork and Dublin.’

Mr O'Keeffe said despite the job losses it was important to remember Pfizer remains a big player in Irish industry.

‘Although the company plans to cut its global headcount by 6,000, Pfizer remains a major multinational employer in Ireland, with more than 4,200 workers involved in the manufacture of high-end products for the life science industry worldwide,’ the Minister said.

Unions are calling for Government support to ensure as many jobs as possible are saved.

Read the full statement from Pfizer 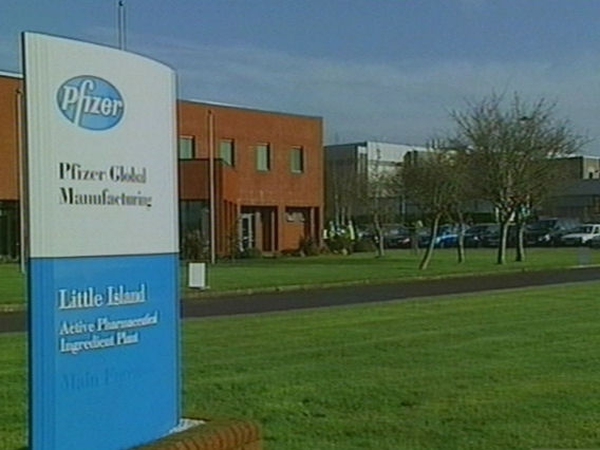