Prison officers tonight forcibly removed a group of republican inmates who barricaded themselves into a dining hall at Northern Ireland's top security jail.

No one was injured in the hour-long operation to end the two-day protest by 28 prisoners at Maghaberry Prison in Co Antrim.

The inmates blocked the doors of the room yesterday morning - the day republicans traditionally commemorate the 1916 Easter Rising in Dublin against British rule.

A suspicious object was thrown out into the corridor at the outset of the incident but bomb disposal officers later declared that it was not a viable explosive device.

The prisoners, who had been attending a Mass in the hall inside the republican Roe House accommodation block, remained there last night as supporters called for them to be granted political status.

The decision to end the demonstration was taken by Northern Ireland Prison Service director Robin Masefield.

‘The Prison Service is pleased to announce that the incident in Maghaberry Prison has been resolved,’ said a NIPS spokesman.

‘The Republican prisoners, who had barricaded themselves in their dining room in Roe House on Easter Sunday morning following a church service, have now been returned to cellular accommodation. This followed intervention by Prison Service staff on the authorisation of the Director.

‘The ending of the incident was observed by members of the Independent Monitoring Board.

‘There were no injuries to staff or any prisoners.’

The protest came as dissident republicans continue to launch attacks throughout Northern Ireland.

On Saturday, a car bomb was abandoned outside Crossmaglen police station in Co Armagh.

The vehicle, which was packed with containers of flammable liquid, failed to detonate.

Around 100 people watched as a masked man purporting to be from the Real IRA read out a brief statement. 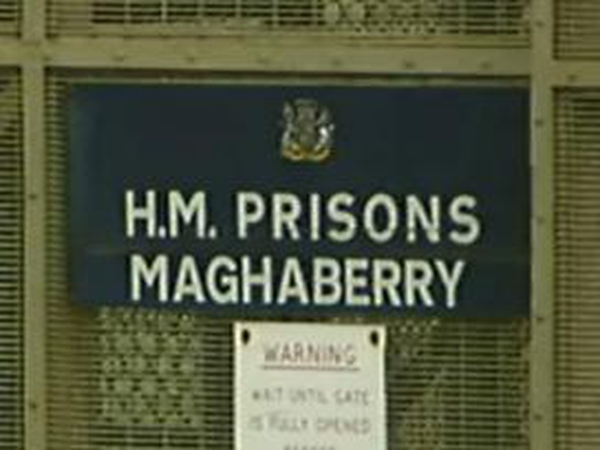