The Government has rejected union proposals aimed at securing savings in the public sector pay bill without an across-the-board pay cut.

Talks between Government officials and public sector unions broke down this afternoon.

Taoiseach Brian Cowen said the Government could not agree a deal because the union's alternative proposals would not have achieved the necessary savings.

It is believed that concerns about the political and public reaction to the issue of unpaid leave were a key factor.

'The Government is clear that the public service pay bill must make a significant and proportionate contribution to the necessary adjustment in the public finances in 2010 and subsequent years,' said Taoiseach Brian Cowen.

'Unfortunately, the proposals put to Government do not provide an acceptable alternative to pay cuts.

The Taoiseach said the Government had facilitated the unions in good faith and understood their disappointment. But he said he made no apologies for engaging with them.

The Irish Congress of Trade Unions said it noted with astonishment and deep regret the Government's decision to terminate discussions.

'That this decision was taken following a hostile campaign of opposition to the proposals before they could be either finalised or explained is inexplicable,' said ICTU General Secretary David Begg.

Chief union negotiator and IMPACT General Secretary Peter McLoone confirmed that the talks broke down because the Government could not agree a deal because of the controversy over the unpaid leave proposal.

He said the Government had lost 'a glorious opportunity' to achieve the transformation of the public service that it wanted.

Reports that deal was close

Earlier, it had been reported that Government officials and trade unions negotiators were close to reaching an overall agreement on radical change in the public sector including savings of €1.3bn.

Unions will have to now wait until Wednesday to see how savings will be made.

Speaking later on RTÉ’s Six-One News, the Taoiseach said he still believes in partnership despite the breakdown in talks.

Mr Cowen said he was disappointed the partners were not able to find the basis for agreement on this occasion.

He said the parties should work together even if they could not agree on this particular issue.

Mr Cowen said the Government would probably have to see a reduction of about 5% or 6% in public service pay. That would be announced in the Budget.

Trade unions leaders have disputed Mr Cowen's comments that measures proposed by unions would not have delivered savings of €1.3bn.

At a press conference this evening Mr McLoone said: 'I cannot see anyway how they [the Government] could make that statement. That is shifting the goal posts.

'There is failure and that is a huge disappointment. We will deal on Monday with where we go from here.'

When asked about the prospect of industrial action he said: 'Disputes don't aid resolution of the crisis.'

IBEC Director General Danny McCoy said: 'While disappointed that agreement could not be reached on the necessary savings, it remains crucial that the government sets out a credible budget on Wednesday that delivers the necessary cuts in public expenditure rather than increasing taxes.

'The stabilisation of the public finances will provide the necessary platform for economic recovery and much needed job creation.' 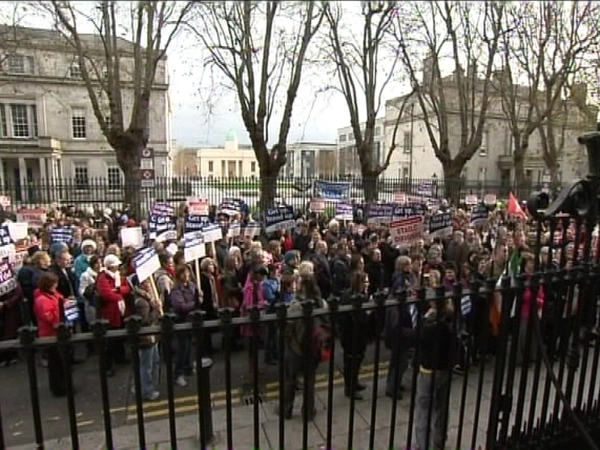