A co-ordinated series of demonstrations by up to 5,000 farmers have caused significant traffic delays in many towns across the country.

The Irish Farmers’ Association-organised demonstrations are to raise awareness of falling incomes and the need for special measures in the farming sector.

Traffic in Bandon, Co Cork, earlier came to a standstill as over 150 tractors made their way through the town as part of the nationwide protest.

Speaking this morning, the IFA's Anne Keohane said farmers came from as far as Dunmanway, Ballinspittle and Clonakilty to highlight their concerns over falling farm prices.

Around 100 tractors took part in another protest in Portlaoise.

Over 100 tractors and 25 other vehicles took part in the tractorcade in Sligo.

IFA President Padraig Walshe said the move is part of the organisation's national campaign for equity and fairness for farmers.

Mr Walshe says the Government is not listening to the farming community and is failing to deal with concerns and problems which could wipe out the industry.

He says farm incomes have been falling steadily for the past number of years, and the association wants specific measures put in place to deal with the crisis in the sector.

The IFA says farm incomes this year have fallen by as much as 25%.

Bad weather, falling commodity prices and Government cuts are the main reasons given for the income drop.

The association says it hopes by bringing farmers onto the streets that the public will become aware of the significant issues the sector is facing.

Mr Walshe urged all TDs and Ministers to defend and support the sector through what he termed its 'latest crisis'.

Minister for Agriculture Brendan Smith has responded to the protests saying that he fully acknowledges the difficulties facing the farming community this year.

He said he has been consistently working both within Government and at EU level to alleviate the current difficulties being faced by the sector.

The Minister stated that a key element is the bringing forward of the Single Farm Payment and also the support measures being put in place by the EU Commission in relation to the dairy sector. 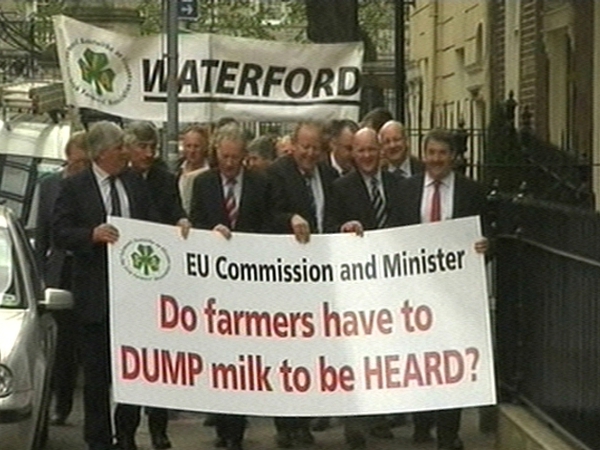