Labour leader Eamon Gilmore has challenged arguments that workers' rights would be weakened by the Lisbon Treaty.

Speaking on RTÉ's Morning Ireland, Mr Gilmore insisted that workers' rights would be strengthened by Lisbon.

'Putting these rights into the treaty will prevent the race to the bottom,' Mr Gilmore stressed.

He was responding to the TEEU's Eamon Devoy who said 'there is not a single thing' in the Lisbon Treaty that was not already enshrined in European legislation.

'The Lisbon Treaty does not improve workers' conditions or workers' rights one jot.'

The question of workers' rights has been a central bone of contention in the Lisbon Treaty referendum campaign.

Supporters say that the Treaty will give legal standing to the Charter of Fundamental Rights, including enhanced collective bargaining rights for workers.

Opponents insist it does not go far enough and that rulings from the European Court of Justice have weakened protection for employees.

Fine Gael has said that it will legislate for collective bargaining rights for unions to negotiate on behalf of workers if it returns to government.

Collective bargaining models vary and in some countries employers must recognise and negotiate with unions.

However, in other countries, such as the US, they need only do so where a majority of workers vote for it by secret ballot.

Mr Kenny admitted Fine Gael had not yet worked out the final detail but would be proposing a plan that would be somewhere between the Australian and US models.

The Fine Gael leader also announced that former Polish Solidarity leader and veteran trade unionist Lech Walesa had been invited to Ireland by the party to campaign for a Yes vote on Lisbon.

Mr Kenny described Mr Walesa as an iconic figure in Europe and a champion of workers' rights.

Sinn Féin unveiled their new No to Lisbon posters in Dublin this morning.

At the launch of the posters, Sinn Féin Vice President Mary Lou McDonald said: 'The Lisbon Treaty was a bad deal for Ireland and the EU in 2008. The Government has not secured a single change to the Treaty since then.

'It remains a bad deal for Ireland and the EU. As it is exactly the same treaty, Sinn Féin is urging people to give it the same answer and vote No on 2 October.'

Ms Dodds told the European Parliament this afternoon that 'post-dated promises and threats' had done nothing to change the fundamentals of the Lisbon Treaty.

She said that the Irish electorate had exercised good sense in the first referendum and predicted that they would do so again.

The Northern Irish MEP also said the British electorate should be allowed to vote on the treaty.

She was speaking following the inaugural speech by the parliament's President Jerzy Buzek. 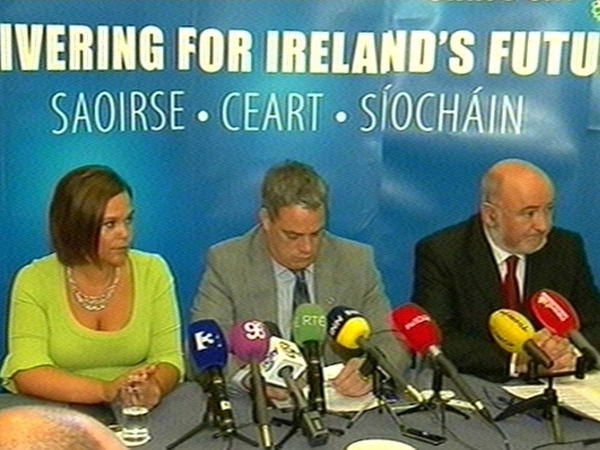