Three men have been found guilty in the UK of plotting to kill ‘thousands’ by blowing up transatlantic airliners bound for North America in mid-flight suicide attacks using bombs made from liquid explosives.

The suspected al-Qaeda plot had huge worldwide ramifications leading to tight restrictions on the amount of liquids passengers could take on board aircraft.

Four other men were found not guilty of plotting to blow up planes but the jury failed to reach a verdict on another suspect.

Abdulla Ahmed Ali, 28, was the suspected leader of the plot and was found guilty of conspiring to murder thousands of people.

Tanvir Hussain, 28, and Assad Sarwar, 29, were also found guilty on the same charges of plotting to carry out near-simultaneous bombings.

But Ibrahim Savant, 28, Arafat Waheed Khan, 27, and Waheed Zaman, 24, were found not guilty of the airline plot at Woolwich Crown Court.

The jury failed to reach a verdict on the role in the plot of Umar Islam, 31, although he was convicted of conspiracy to murder.

Donald Stewart-Whyte, 23, was found not guilty of both charges.

Prosecutors had alleged that eight Islamic fundamentalists who aimed to cause death on an 'almost unimaginable scale' were directed by masterminds overseas to take bombs disguised as soft drinks on to US and Canada-bound planes.

The plan involved mixing hydrogen peroxide with food colouring and a powdered soft drink before injecting the mixture into the bottom of soft drink bottles.

Refilled batteries would carry the chemical detonator, with the bombs being set off using a charge from a light bulb filament.

According to prosecutors, the group had planned to smuggle the bombs aboard flights bound for Montreal and Toronto in Canada, and San Francisco, Washington, New York and Chicago in the US.

The plot is the reason why millions of air passengers are now restricted on how much liquid they can take on board a plane.

Current rules state that travellers can only carry 100ml containers on to an aircraft and the bottles or tubs must fit into a re-sealable bag measuring 20cm by 20cm.

At first a complete ban on liquids was brought in on 10 August 2006 - the day after the terror plot gang was arrested - but this was later relaxed. 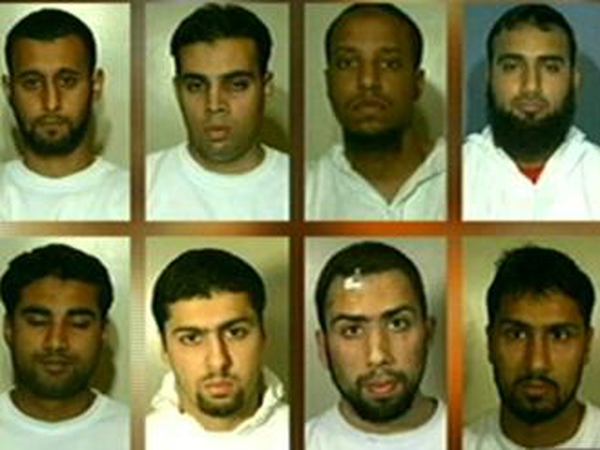