The Minister for Finance has indicated that he will not introduce a new property tax and water charges in the next Budget.

Mr Lenihan has confirmed that his priorities for the Budget will be the introduction of a carbon tax and more spending cuts.

In the coming days, the Minister will receive a report from the Commission on Taxation.

Its proposals include the introduction of water charges for every household and a self-assessed property tax on all homes, as well as a tax on child benefits.

However, Mr Lenihan has told RTÉ News that the Government will prioritise spending cuts in the next Budget.

Earlier, Mr Lenihan criticised Fine Gael leader Enda Kenny's proposal to establish a 'good bank' to help get the country out of recession.

Speaking on RTÉ's This Week, Mr Lenihan said he was disappointed by the proposal for a national recovery bank.

The Minister described it as irresponsible and said Fine Gael had failed to put forward a viable alternative to the National Asset Management Agency.

He also said he was confident that the Green Party would support the legislation to establish NAMA when it comes before the Dáil next month.

Mr Lenihan said he did not envisage fully nationalising another bank as it had to do in the case of Anglo Irish Bank.

Mr Bruton said Minister Lenihan had chosen not to engage in a debate about the establishment of an alternative to NAMA.

He said: 'I don't want a divisive vote on the NAMA issue to interrupt the Lisbon debate.'

The Taoiseach has said a tax on property is not a done deal as part of efforts to reduce the budget deficit.

Brian Cowen told the Sunday Independent that he was not 'wedded' to property tax.

He said that the Government needs to examine whether there are better ways to fund local authorities.

However, he added: 'But I don't want that to be suggested that we are not prepared to take the decisions that need to be made if that is what is deemed necessary.

'We have very low taxes on property in this country, if any.'

The Commission on Taxation has finished a report for the Government on possible changes to the system of taxation starting next year.

It has been reported that it has recommended introducing a property tax based on each home's value to replace a stamp duty tied to property sales.

Mr Cowen had faced a backlash from Fianna Fáil TDs over the proposal and he admitted that further tough decisions lay ahead of him.

He said: 'There are a lot of difficult political decisions coming down the line.

'The party knows there is a job of work to be done by Government. People are going to have their say in terms of what the position should be.

'But at the end of the day, we have to close the gap between what taxes are coming in and what is being spent. If we don't do that we put the whole future at risk.'

Mr Cowen also said he would be more pro-active about speaking directly to the public amid criticism of his handling of the economic situation.

He said: 'I take the criticism. We have to get out there more, me included. I have to better communicate with the people. I will do that.' 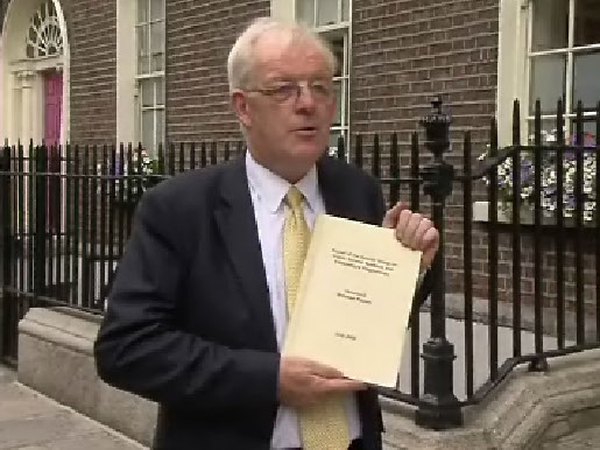